As part of its contribution to meeting the objectives of the Paris Agreement, which aims to limit global warming to below +2°C, the aviation industry must step up its environmental transition. For this reason, Air France is launching an “Air France ACT” programme setting out the airline’s new CO2 emissions reduction strategy.

This strategy is based on 3 priorities:

“Air France ACT” embodies the transparent, realistic and science-based approach adopted by the company to ensure its environmental transition through concrete and measurable actions.

The new decarbonisation trajectory targets a 30% reduction in CO2 emissions per passenger/km by 2030 compared to 2019. This objective excludes so-called “offsetting” actions to consider measures that exclusively reduce direct and indirect emissions. It corresponds to a 12% reduction in the company's total emissions between 2019 and 2030, in line with expected changes in activity, after a 6% reduction achieved between 2005 and 2019.

This trajectory is based on a scientific assessment method developed by the independent reference organisation SBTi (Science-Based Target initiative), to whom it was submitted. Founded by the CDP (Carbon Disclosure Project), the United Nations Global Compact and the World Wildlife Fund, SBTi has set CO2 emission reduction targets for the air transport sector, compatible with the Paris Agreement, which aims to limit global warming to below +2°C.

By 2050, Air France aims to achieve net-zero emissions, i.e., a drastic reduction in its CO2 emissions coupled with contributions to projects that will remove from the atmosphere a quantity of CO2 equivalent to residual emissions each year. The company is working to define a precise and verifiable decarbonisation trajectory for 2050, based on a set of hypotheses – notably concerning an evolution of traffic – which may vary. Therefore, this is an evolving process, guided by the ambition to be in line with the scientific benchmarks, as is the case for the trajectory for 2030.

To achieve these goals, Air France is activating all the decarbonisation mechanisms it has at its disposal -

At the same time, Air France is changing, and its customers’ behaviour and relationship to travel is changing. Whether they aspire to show more restraint by travelling less often and staying for longer periods or combining business and leisure travel, Air France is committed to supporting them by giving them the means to act at their level, by notably investing in its sustainable aviation fuel programme beyond regulatory requirements. 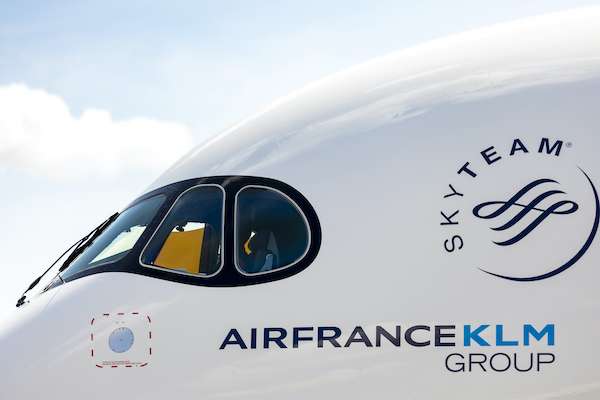