Inmarsat unveiled a major strategic collaboration with Hughes Network Systems, LLC (HUGHES), the global leader in broadband satellite networks and services, marking an important new step change for North American commercial airlines and their passengers. GX+ North America is a transformational aviation connectivity solution, which has been specifically designed for North American commercial airlines and is available today. It seamlessly integrates the unrivalled capacity of the Hughes JUPITER™ High-Throughput Satellite (HTS) constellation across North America with the extensive worldwide coverage and resilience of Inmarsat’s Global Xpress (GX) HTS satellite network, bringing a unique combination of unprecedented capacity, speed and reliability to the region, unavailable from any other satellite provider. The ground-breaking new solution underscores Inmarsat’s strategic vision as it looks past the pandemic and into the future needs of commercial airline fleets in North America, whose passengers will require ubiquitous connectivity as they return to the skies.

The ultra-high capacity of GX+ North America will, for the first time, make it possible for North American airlines to meet increasing passenger demand, including the surge in traffic expected from free-of-charge inflight Wi-Fi. Today, satellite networks are trying to serve thousands of commercial aircraft in the world’s busiest airspace, and as they reach capacity, airlines will struggle to meet the demands of data-hungry passengers who want reliable, affordable, high-speed Wi-Fi while on board. For too long, North American airline passengers have had to settle for constrained bandwidth activities such as email and limited messaging while on board flights. GX+ North America will give passengers the freedom to stream videos and audio, shop online, check and update social media, and catch up on work, all while in the air.

The superior capabilities of GX+ North America mean that North American airlines no longer need to compromise on speed, reliability, availability or coverage for inflight broadband, even when flying at full capacity over the busiest airport hubs. This also offers full flexibility for route planning, even on short notice, as the solution can cover any route worldwide through the GX global network -- whether to Hawaii, Canada, Bermuda, the Caribbean, across the Gulf of Mexico, to Central and South America, across the Atlantic or even to the most extreme northern latitudes.

Rupert Pearce, CEO of Inmarsat, said: “GX has firmly established itself as the reference inflight connectivity solution for today’s demanding passengers and is used by airlines worldwide. We are very confident that this game-changing collaboration with Hughes, combining their market-leading depth of capacity with Inmarsat’s award-winning passenger connectivity solution, uniquely delivers inflight broadband that is consistently superior regardless of the number of passengers using the service or where they are travelling. It is truly a ‘no compromise’ solution for airlines that no other service provider can offer. We’ve also ensured the transition path for airlines upgrading from other connectivity providers is simple, quick and cost efficient.

“This strategic collaboration is further evidence of Inmarsat’s strength, resilience and innovation despite these unprecedented times in our industry. As a number of connectivity providers in North America face financial challenges and airlines are forced to reconsider their choice of supplier, Inmarsat’s offer continues to go from strength to strength.”

Paul Gaske, Executive Vice President and General Manager, North America division at Hughes, said: “We are proud to partner with Inmarsat to launch GX+ North America. This collaboration leverages the full power of the JUPITER System, including the depth of capacity of our Ka-band High-Throughput Satellite fleet, as well as our JUPITER gateways and modems. Combining the Hughes JUPITER System and Inmarsat’s leading inflight connectivity solution, GX+ North Americamarks a new era for inflight connectivity.”

The new solution will be provided and managed end-to-end by Inmarsat. Prototype flights are expected to start later this year with commercial availability scheduled for 2021.

GX+ North America utilises a robust Ka-band flat panel antenna from Thinkom, with millions of flight hours behind it, together with smart dual aero modem technology powered by Inmarsat’s aviation solutions that intelligently chooses the optimal satellite path with no service interruption or delay for passengers.

Looking forward, as commercial aviation returns to growth and aircraft return to the skies, Inmarsat and Hughes will continue to anticipate and respond to the North American market’s evolving needs. Expanding the service over the next four years alone, the Hughes and Inmarsat combined constellation of seven GX and JUPITER satellites will more than double to a total of 15 spacecraft. These additional satellites include the Hughes ultra-high capacity JUPITER 3 satellite and Inmarsat’s seven advanced, fully-funded next generation GX satellite payloads (6A, 6B, 7, 8, 9, 10A & 10B), which will enhance capacity and coverage throughout the world, including the Arctic. 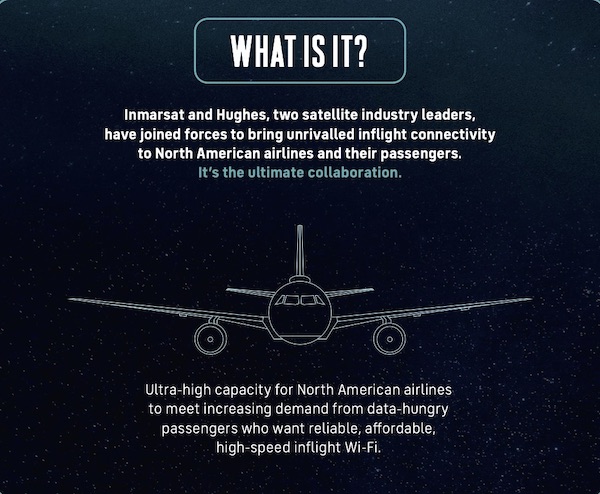