Qantas, Jetstar*, QantasLink and Qantas Freight will offset all growth in emissions from domestic and international operations from 2020.

This includes offsetting all net emissions from Project Sunrise, the carrier’s plan to operate non-stop flights from the east coast of Australia to London and New York, should the project proceed. This will also extend to domestic flying, meaning that growth on key routes like Melbourne-Sydney will be carbon neutral.

The aviation industry, which contributes around 2 per cent of global CO2 emissions, has committed to halving emissions by 2050 compared to 2005 levels. It was the first industry to make such commitments. Qantas had signed up to those commitments but will now exceed them.

Qantas will work with industry, research institutions and governments to develop the long-term solutions to significantly reduce greenhouse gas emissions from the aviation industry over the next three decades. 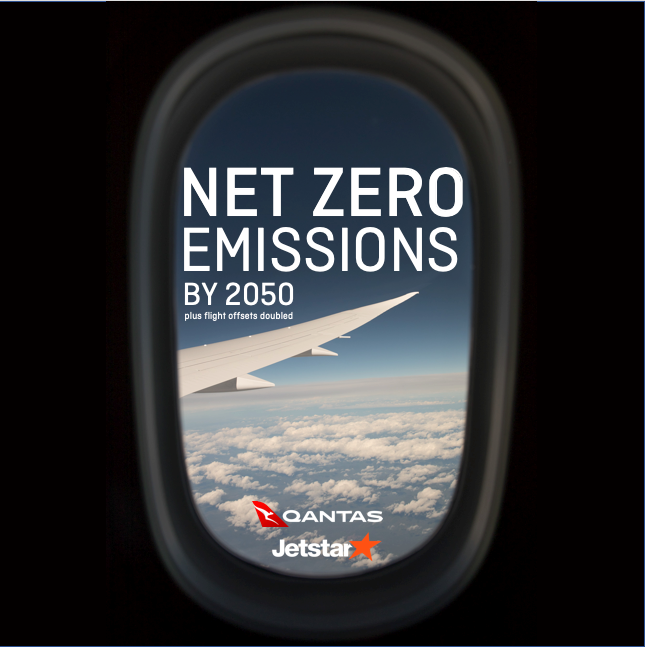 Qantas currently operates the largest carbon offset program in the aviation industry, with around 10 per cent of customers booking flights on Qantas.com choosing to offset their flights.

From today, Qantas and Jetstar will double the number of flights offset by matching every dollar spent by customers who tick the box to fly carbon neutral. By matching our customers’ commitment, we expect even more people to offset their emissions.

This additional investment will see Qantas Future Planet, which is already the largest private sector buyer of Australian carbon credits, support more conservation and environmental projects in Australia and around the world.

Existing projects include protecting the Great Barrier Reef, working with indigenous communities to reduce wildfires in Western Australia and securing over 7000 hectares of native Tasmanian forest.

Qantas will invest $50 million over the next ten years to help develop a sustainable aviation fuel industry.

Sustainable aviation fuel can reduce carbon emissions by eighty per cent compared to traditional jet fuel, but are currently almost double the price.

Qantas will work with governments and private sector partners to support the development of sustainable aviation fuel in Australia and overseas to make it more viable and increase demand throughout the industry.

The national carrier will also continue to reduce its emissions through continued investment in more fuel efficient aircraft, more efficient operations such as single-engine taxiing, and smarter flight planning to reduce fuel burn.

The Qantas Group continues to work with aircraft and engine manufacturers on next-generation technology that will deliver a further step-change in emissions reduction – however, innovations such as electric aircraft engines are still some time away.

“We recognise that airlines have a responsibility to cut emissions and combat climate change. We’ve already made some good progress, especially by investing in newer aircraft that have a much smaller carbon footprint.

“We want to do more, and faster. We’re effectively doubling our carbon offsetting program from today and we’re capping our net emissions across Qantas and Jetstar from 2020 so that all new flying will be carbon
neutral.

“Qantas offsets all of its own travel needs and so do many of our customers. By matching their efforts, we’re hoping it will encourage even more people to offset and the program will keep growing.

“These short-term actions will go towards a longer-term goal of being completely net carbon neutral by 2050. It’s ambitious, but achievable.

“Innovation is going to be key. We’re investing $50 million to hopefully kickstart a sustainable aviation fuel industry in Australia. We know from our own trials that the technology works but we need to get to a scale of production where it’s a practical substitute.

“Concerns about emissions and climate change are real, but we can’t lose sight of the contribution that air travel makes to society and the economy. The industry has already come a long way in cutting its footprint and the solution from here isn’t to simply ‘fly less’ but to make it more sustainable.

“We’re doing this because it’s the responsible thing to do, but hopefully it will also encourage more people to choose Qantas and Jetstar because of the action we’re taking,” added Mr Joyce.