Saudi Arabian Airlines (SAUDIA), the national flag carrier of Saudi Arabia marks ten years of operations to the People’s Republic of China. SAUDIA began operations to Guangzhou on 27 March in 2011, initially with thrice-weekly-flights with a widebody Boeing 777-200, which was upgraded to a B777-300 in 2017 and then to a Boeing 787-9 Dreamliner thereafter (2019).

The airline steadily built up its market presence and flight operations in China over the past decade in response to strong passenger growth and rising demand for greater connectivity between the Kingdom and the East Asian country.

In 2011, the route was operated as a tag flight Jeddah-Riyadh-Guangzhou, which then grew to seven nonstop flights presently, four from Riyadh and three from Jeddah.

SAUDIA operates from the new Terminal 2 at Guangzhou Baiyun International airport, which opened in April 2018. SAUDIA was the first international airline to move its operations to the new terminal.

In response to the coronavirus pandemic outbreak, SAUDIA suspended flights to Guangzhou between February 1, 2020, until July 22, 2020. During the period of suspended passenger flights, the airline transferred its commercial flights to cargo-only and, as a result, carried 543 tons of medical equipment and aid supplies. The Riyadh – Guangzhou link was the first route in the airline’s network to utilize its commercial flight air slots for cargo purposes.

“Thanks to SAUDIA’s outstanding contributions to the global efforts to fight the pandemic, the Saudi Arabia-Guangzhou route has been instrumental during these unprecedented times. In leading up to the tenth year of operations, the airline has grown from strength-to-strength in its presence in China, providing an important air link connecting economic and business ties via SAUDIA’s operational hubs in Riyadh and Jeddah.”

Mr. Zarei continued: “We would like to take this opportunity to thank the Civil Aviation Administration of China and the Guangzhou airport authority for their continued and ongoing support of SAUDIA’s operations. We look forward to increasing our partnership and cooperation in order to build on the successes so far. On behalf of the SAUDIA family, I also extend my gratitude and appreciation to our colleagues in China who have made profound contributions to the airline’s success in Guangzhou through their commitment and dedication to providing exceptional guest experiences.”

SAUDIA seamlessly connects routes into mainland China from the northern hemisphere through its two hubs (Jeddah and Riyadh) and conveniently provides air links onwards within China to domestic routes through its codeshare partnership with China Southern Airlines (CZ). SAUDIA and China Southern Airlines have been long-term partners since the operations to Guangzhou began.

In recent years, SAUDIA has invested significantly in its fleet of more than 145 narrow and widebody aircraft and operates one of the youngest fleets in the skies, with an average aircraft age of 5 years.

The airline’s route network includes more than 90 destinations across four continents to all 28 domestic airports in the Kingdom of Saudi Arabia.

In December 2020, SAUDIA was awarded a Five-Star ranking by APEX. The APEX Official Airline Ratings™ is the first airline rating program based solely on certified passenger feedback.

Most recently, in January 2021, the airline became one of ten airlines worldwide to be awarded the Diamond status by APEX Health Safety powered by SimpliFlying. 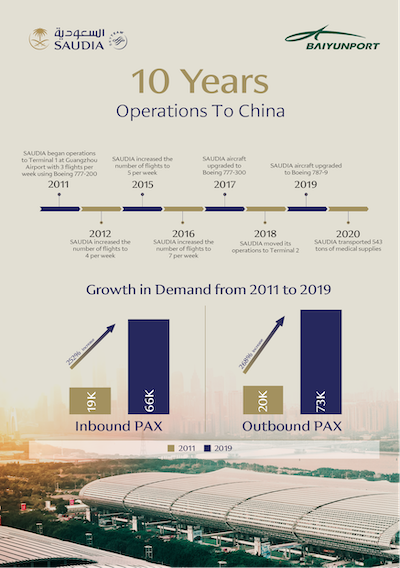 Loading comments for SAUDIA marks 10 years of operations to China ...