The East Wing of Geneva Airport takes off on December 14

The East Wing building, mainly dedicated to long-haul travelers, is durable, functional and elegant. It will officially enter into service on December 14, 2021, on a Geneva - New York flight. Ten years of work were necessary to create this daring exoskeleton incorporating cutting-edge technologies. This particular construction thus contributes to the international influence of Geneva and its region. Due to sanitary conditions, its official inauguration has been postponed until spring 2022.
Fully funded by Genève Aéroport, the East Wing significantly improves the reception of passengers on continental and intercontinental flights, while meeting current standards. It replaces the widebody pavilion, built on a provisional basis in 1975 and now obsolete, both technically and environmentally and in terms of passenger reception.

The East Wing was completed between 2017 and 2021, but the preparatory work took almost five years. This metallic parallelepiped with an industrial design, 520 m in length, is able to accommodate nearly 2,800 passengers per hour on departure and 3,000 on arrivals.
The project was born thanks to the collaboration of companies forming the RBI-T consortium, grouping two architectural firms and two engineering firms. Graham Stirk of Rogers Stirk Harbor + Partners designed the project and led the team from initial ideas to completion, relayed to Geneva by the Jacques Bugna Architecture Workshop. At their side, two engineering offices: Ingérop (Paris) and T-ing Ingénierie based in Geneva.

A big challenge
"Genève Aéroport now has a quality tool, architecturally daring, aesthetically successful, built sustainably and meeting the requirements of the 21st century," notes Corine Moinat, Chairman of the Board of Directors.
The construction of the East Wing is above all a major technical challenge with the tarmac on one side, very close buildings (including Palexpo and the Arena) on the other as well as height restrictions associated with to the overhead ceiling. In addition, under the building, a road allows buses and other airport vehicles to circulate at all times. Thus, the East Wing was erected on an extremely limited available area. It was necessary to compete in ingenuity to circumvent the little freedom to the volume restricted by neighboring buildings or to bury 200 meters of the customs road.
The cost of the East Wing sector - which amounts to 610 million francs - includes the East Wing building, the customs road, the construction and demolition of the GP + (for wide-body aircraft), the INAD North - dedicated to people not allowed on Swiss territory - as well as the preparatory work of GeniLac.
"My predecessors initiated this important project, of which the new Wing embodies the most spectacular achievement of work undertaken over a decade," points out with pride André Schneider, General Manager of Genève Aéroport. "This is why we have bet on innovative and essential equipment for intercontinental connectivity of Geneva in 2030-2040, and even beyond." 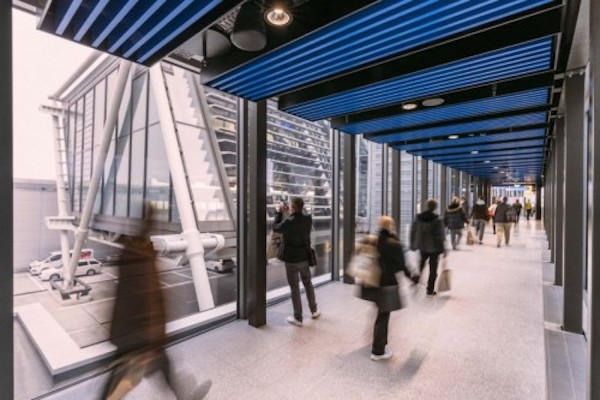 Positive energy balance
The concept of the East Wing significantly improves the energy balance of the airport, thanks to the implementation of advanced technologies. The thermal insulation of the departure lounges is guaranteed by the deployment of high-performance triple-glazed facades, combined with specific solar protection in the summer.
Electricity is produced by a nearly 7,000 m2 solar installation made up of some 3,400 photovoltaic panels. Energy neutrality is thus ensured thanks to the combination of the solar power plant, extensive insulation of the building and high efficiency heat pumps. These will initially produce and store thermal energy through 110 geothermal probes. The future connection to the GeniLac network will complete this 100% renewable energy source.
For architect-designer Graham Stirk of Rogers Stirk Harbor + Partners, “Achieving a sustainable positive energy model has been an intense and iterative process, requiring close collaboration between specialists in facade engineering, mechanical and electrical installations. "

ORAT tests
During the days of November 11 and December 2, 2021, Operational Readiness Airport Transfer (ORAT) passenger experience tests were carried out with nearly 1,000 volunteers in order to verify that everything is functioning perfectly in terms of security systems, access, flows. This is the very first time that Genève Aéroport has tested one of its buildings with so many external extras! 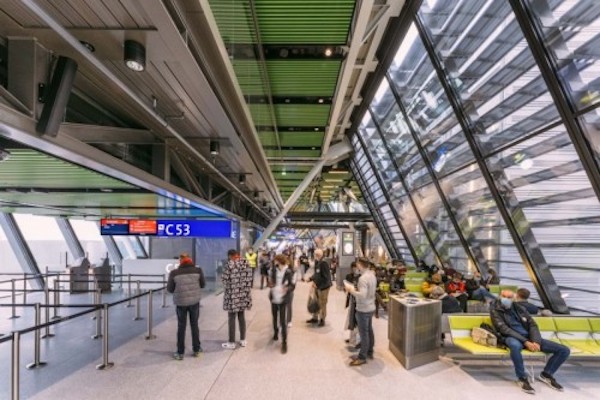 Loading comments for The East Wing of Geneva Airport takes off on December 14...