All industry professionals are aware of different airport ratings, best in the region, best in the country, best i the city... Especially for important business aviation airports it's a "must be" to be among the TOP winners. No need to explain strategic London's place in business aviation. So, let's have a look Whats'Up in London Oxford Airport. Changes has been made, newcomers to choose to settle in, future vision and development plans.

London Oxford Airport retained its position in the top five UK business aviation airports during 2018 with some 5,500 business aviation movements logged and a 20% increase in passengers in the last year.  Its OxfordJet facility – now into its 11th year, continues to handle more and more medium and large cabin jets - from as far afield as Tokyo.

There was a slight growth, 2% up in bigger business jets, compared with 2018, whilst light jets and mid-range types remained stable. Turboprops, in particular Pilatus PC-12 activity, expanded significantly - 34% over last year, mainly flying privately.   The airport also started to see regular Pilatus PC-24 movements, from fractional ownership company JetFly. Leisure charters increased, in part due to the increasingly popularity of the neighbouring Cotswolds for weekend city dwellers; weddings and events at Soho Farmhouse in Great Tew, 14 miles away.

In a year dominated by the uncertainty of Brexit, the airport has benefitted from the arrival of new tenants, more based aircraft, including two Bombardier Globals (looked after by Excellence Aviation, now under Inflite The Jet Centre ownership) and existing businesses expanding their operations.   For example, group purchasing organisation AVIAA, acquired a similar business in the UK, Convolus and complemented its UK Oxford office with a new base in Germany, headed by Managing Director Irena Deville.

GlobeAir of Austria, the largest Cessna Citation Mustang charter operator, has established a Part 145 base and line maintenance business at Oxford to support its fleet in house.  Patrick Marchant, former head of maintenance at Blink Air and EuroJet, leads the activity.  Its Mustangs were previously supported by Gama Aviation at Oxford, which moved out last year.  Globe Air has subsequently increased its Mustang fleet to 20, taking an additional four from WiJet of France.  With nearly a third of its charters flying in or out of the UK now, including its prolific contribution as a Victor and Privatefly operator, Globe Air is able to offer competitive charter prices on its flights.

Light, GA traffic is up

Up & Away, the aircraft detailing and aircraft interior/exterior cleaning business, has formally established its HQ at Oxford, while retaining activity at 15 other UK airports.  The business divided into two early this year – splitting private aviation and commercial aviation work.  It has recently won two major cleaning contracts from leading low-cost carriers, necessitating 100 new jobs. Founder and Managing Stefan Murphy recruited Greig Nairn as COO, former customer service executive at Airbus and ops manager at F1 Air Charter. Up and Away is also eyeing expanding its business aircraft valeting offering to France – Nice and Paris.

hullo Aircrew – the online platform which connects freelance aircrew and operators has this month secured investment from Jet Aviation, a General Dynamics company, to help it further develop their platform and products. Since EBACE 2018 hullo has secured an additional 2,000 members with continued growth and is now offering permanent as well as temporary positions, in response to demand.

London Oxford Airport’s helicopter activity is maintained at 2018 levels, supporting some 6,000 movements. The airport continues to offer the lowest priced London region helicopter shuttles to and from London Heliport at Battersea (taking just 22 minutes) - at £1,995.  For VIP interlining with business jets, it also offers discounts if booked via the OxfordJet FBO. The Children’s Air Ambulance, partly supported by the Reuben Foundation, adds to an expanded helicopter presence led by Airbus at Oxford.   London Heliport, the UK’s only licensed heliport serving the capital is 60 years old this year.

In response to ongoing slot and access constraints at major commercial airports around London, in particular at night during the summer months, the airport has initiated a dialogue with the local authority to explore means to occasionally offer limited slots after midnight and before 06:00 hrs with nightly and cumulative weekly, monthly and annual caps.   “We are hopeful of a conclusion later this year,” said James Dillon-Godfray, noting Luton and Stansted are already unusable for business aviation after 23.00hrs to 05.00hrs for June to September again this summer.   RAF Northolt is also closed to fixed wing business aviation traffic from April for at least six months. “We are ready to take on additional movements,” notes Dillon-Godfray.

Further adding to the infrastructure, a new 101-bedroom Premier Inn, adjacent to the airport is scheduled to open this autumn, representing a £14 million investment.  It will also include a 150-cover restaurant. 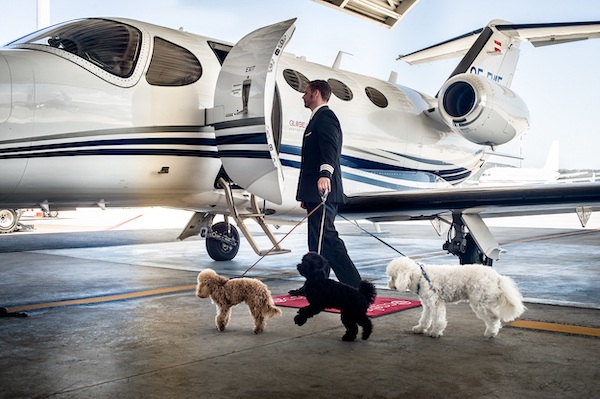