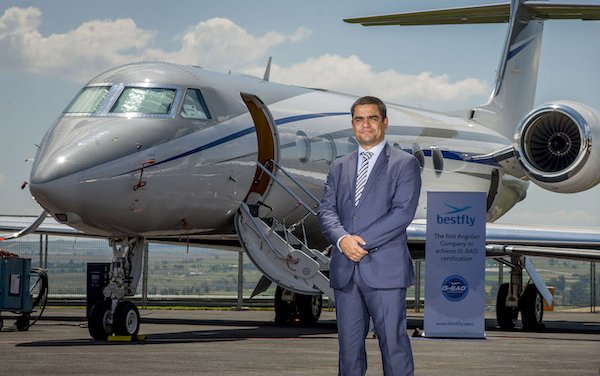 Bestfly, the Angola-based aviation services company, has achieved IS-BAO, International Standard for Business Aviation Operators, Stage 2. This is the first time an Angolan business aviation company has been awarded the status, which is designed to help flight departments and operators achieve a high level of safety and professionalism. It also makes Bestfly one of the very few companies in Africa to achieve the standard.

The IS-BAO Stage 2 audit assessed the maturity of Bestfly’s Safety Management System (SMS), and the subsequent certification confirms Bestfly is successfully implementing the highest levels of operational safety, and mitigating risk by adhering to its robust SMS. It also acknowledges that Bestfly is delivering a level of service that meets the sector’s exacting international standards. IS-BAO Stage 1, awarded to Bestfly in May 2017, confirmed the business had closely reviewed its operations to establish, and follow an SMS to meet the necessary standards required for IS-BAO certification.

The accreditation, which is managed by the International Business Aviation Council, IBAC, is only awarded to an operator following an independent audit that examines all areas of business operations. Holding IS-BAO status is commonly thought of as achieving the pinnacle of industry standards for business aviation operators and gives confidence to customers that specific levels of day to day operational procedures are being followed and met. As with Stage 1 the audit required Bestfly to invest significant amounts of time, money and personal effort from the local team to achieve the goal.

“The certification demonstrates our continued commitment to safety and professionalism and is a credit to all our employees. It also gives our international clients and partners confidence in our operating capabilities. We want customers to automatically associate Bestfly with best-in-class operations and to choose us when travelling in Angola. The Stage 2 accreditation gives them the assurance that we operate to the same high standards as other leading international business aviation organizations,” said Nuno Pereira, CEO, Bestfly. “As Angola, and Africa, continues to develop its business aviation sector we hope that more African companies will be inspired to achieve the IS-BAO accreditation,” added Pereira.

Switzerland-based GCS Safety Solutions conducted a thorough audit which took approximately two months to complete, with minimal recommendations made. The company has also been certified by the Angolan CAA, and the Aruban Department of Civil Aviation and holds AOCs from each. As well as being audited and approved by leading oil and gas companies Bestfly holds Third Country Operators approval from EASA all of which supports its work operating and assisting foreign-registered aircraft. The awarding of Stage 2 supports Bestfly’s continued operations of these aircraft and positions the company as a leading African company committed to adopting international standards for aircraft flying in and out of Angola.

EVFLY, an air fleet management and air transport organisation company, aims to enable the greatest number of people to travel without constraint, at an affordable cost and in complete safety while bei...