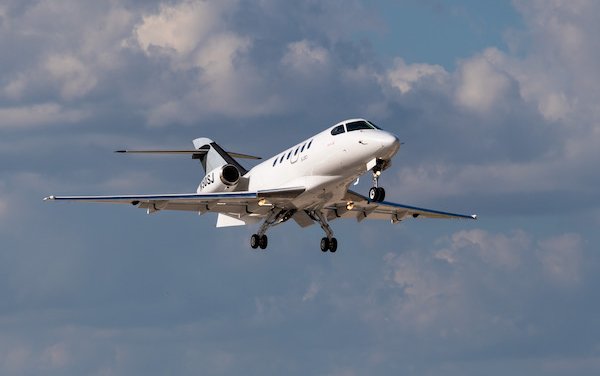 SyberJet Aircraft has successfully completed first flight of its SJ30i aircraft featuring SyberVisionTM, an all-new cockpit based around the Honeywell Epic 2.0 avionics suite, new ergonomic enhancements, electronic standby attitude/heading display, and much more.  SyberJet conducted the flight out of its Engineering and Product Development Center at the San Antonio International Airport (KSAT) and kicked off an 18-month certification test program which will culminate in an amended type certificate for the SJ30i and immediate subsequent deliveries thereafter.

Mark Elwess, Chief Engineering Test Pilot and Senior Flight Test Engineer Robert Moehle put the aircraft through its paces during the flight.  Mark comments “We completed all of the test points planned for the first flight and got a look at how much easier the cockpit and systems are to manage with the new Honeywell Epic 2.0 cockpit. The SJ30i known as the fastest and longest ranged light jet on the market now has a cockpit to lead us into the next generation.”

“The SJ30i takes the original SJ30-2 to the next level.  While it remains the fastest and longest-range jet in its class, the SJ30 now has all of the advances in cockpit and electronic design to make it simply the finest light jet available” says Mark Fairchild, Vice President of Customer Experience.  He adds, “In addition, the SJ30i also features an all new interior design in conjunction with the lowest cabin altitude of any business jet flying today to provide a bespoke experience for its passengers and crew.”

Chuck Taylor, President of SyberJet commented on this momentous occasion for the SyberVisionTM flight test aircraft, stating “First flight of the SJ30i is a significant milestone for the program.  Our Research and Development team and supplier partners have done a fantastic job of integrating the SyberVisionTM cockpit into the proven SJ30 platform.  SyberVisionTM makes the fastest and longest-range light business jet in the world, the SJ30, even better.”

The flight test aircraft will be on display (Static Space SD908) at the NBAA in Las Vegas this month.  Stop by to discuss why owning an SJ30i is better now than ever before.