Responding to customer interest, Tamarack Aerospace has announced its current demonstration and validation tests for the King Air Tamarack Performance SMARTWING, a new military version and civilian version of the patented sustainability supporting Active Winglet™ load alleviation technology. This modification process is being held in partnership with Dynamic Aviation and is under review by US military and defense organizations that are interested in improved mission capabilities such as enhanced high/hot takeoff performance, extended loiter time, increased payload, and support for sustainable flight including noise reduction. The Tamarack Performance SMARTWING modification is expected to replace current King Air passive winglets, providing substantially more capabilities and significant fuel cost savings.

The Tamarack Performance SMARTWING marks the second airframe variation modification produced by Tamarack in addition to the nearly 150 Cessna CitationJets currently modified with Tamarack’s Active Winglet. The Cessna fleet exhibits up to 33% fuel savings with this sustainable aftermarket technology, plus various performance benefits also featured on the Performance SMARTWING. Dynamic Aviation is one of the world’s best known aviation solution providers for the Department of Defense and commercial aviation, operating the largest privately owned fleet of King Airs in the world.

“Implementing new Tamarack sustainable technologies like the Performance SMARTWING into different aviation sectors is a positive step toward sustainability efforts,” says Klinginsmith. “As we move toward our big carbon emission reduction goals, we need to be looking at technologies that are going to make a significant impact and can be applied now while providing impactful operational cost savings.”

The Tamarack Performance SMARTWING also shows performance benefits of improved endurance and improved High/Hot takeoff performance, which can aid in the deployment of King Airs; by adding approximately eight feet of wingspan (depending on the aircraft model), the increased climb capabilities can allow aircraft to take off during conditions that otherwise would ground aircraft without the Tamarack Performance SMARTWING modification. This benefit is crucial to the defense market, as mission readiness and safety are top priorities.

As Tamarack business continues to grow, the company is tentatively planning to make the Performance SMARTWING modification available to civilian-use King Airs.  The current flight testing is being conducted on a King Air 200 series aircraft; and Tamarack will also be modifying a King Air 350 series aircraft for demonstration and performance assessments soon. 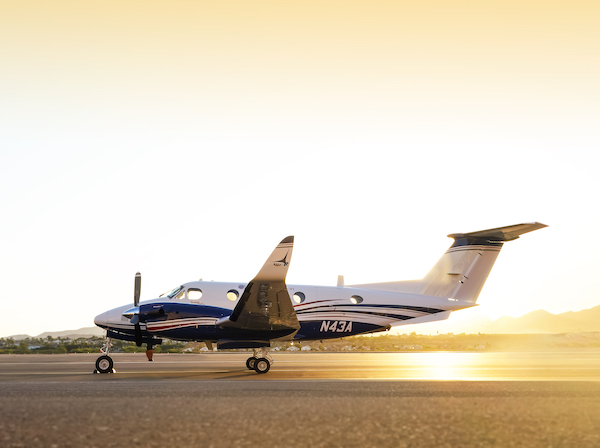