A challenge? A competition? Who will winn? And if you remember an ABBA's song - The Winner takers it All!  Tamarack Aerospace is thrilled to kick off the highly anticipated Fly-Off between an unmodified CitationJet and a Tamarack-transformed CitationJet. This event is a real-world comparison between Tamarack Active Winglet performance on a Cessna CitationJet (N44VS), and a “flat-wing” CitationJet without Active Winglets (N741CC). The fly-off is scheduled to commence on Tuesday, January 26, 2021 from Portland, Maine (PWM) to West Palm Beach, Florida (PBI). The Aircraft Owners and Pilots Association (AOPA) is documenting this weather-permitting event, with multimedia journalists aboard both aircraft. The National Aeronautic Association (NAA) will document the race for the potential setting of a record speed between this city pair in for this type of aircraft.

Tamarack CEO Nick Guida is confident in the Tamarack-transformed jet’s ability to perform. “This will be the first fly-off comparing an Active Winglet aircraft and a flat-wing aircraft operating under the same conditions,” shares Guida.” Active Winglet mods on Citations can result in up to a 33% fuel savings, depending on weather conditions and other variables, so the Active Winglet competitor may make the approximate 1,292-mile trip without a stop.”

The Active Winglet-equipped Cessna CitationJet (N44VS) will be flown by 30-year pilot and aircraft owner Wick Zimmerman, CEO and co-founder of Outside the Lines. The unmodified flat-wing aircraft (N741CC) will be flown by aviation veteran Mike Laver, owner of Carolina Turbine Support. 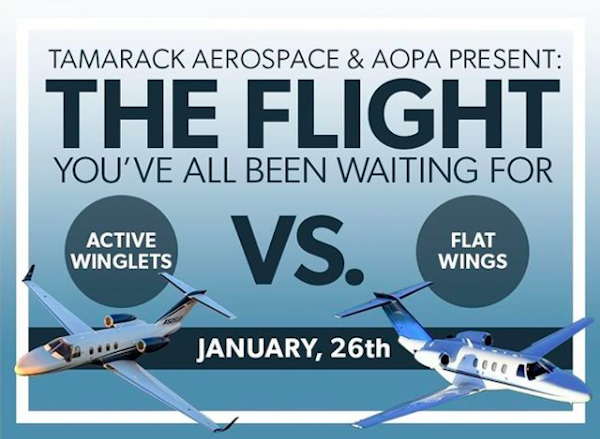 “The fly-off is very exciting. I’m going to do my best to win the race,” shares Mike Laver. ”This kind of race has never been done before, and it will put to rest once and for all any question about the value of these Active Winglet installations. I’ll pay attention to how high and how fast the Active Winglet jet performs, “says Laver.

“I am looking forward to the aviation community seeing how my Active Winglet equipped aircraft performs against the flat-wing,” shares Wick Zimmerman, who reports several cross-country flights that have required multiple expensive and time-consuming fuel stops before he invested in Active Winglets. “Active Winglets also make a dramatic difference getting into and out of places that are high and hot,“ he says. “For example, when we’re operating out of Salt Lake City, the takeoff and climb is a game-changer. With Tamarack Active Winglets, we went straight up to 40,000 in just under 26minutes. We were still climbing at 500-plus feet per minute when we leveled off. You could hear the controllers gasping.”

Tamarack Active Winglets are comprised of a wing extension, a winglet, and an autonomous load alleviation system. The sustainable active winglet technology features an instantaneous and autonomous adjustment to turbulence, affording smoother and safer flights, quicker climbs, fewer stops, up to 33% percent reduced fuel use, and more stable approaches. 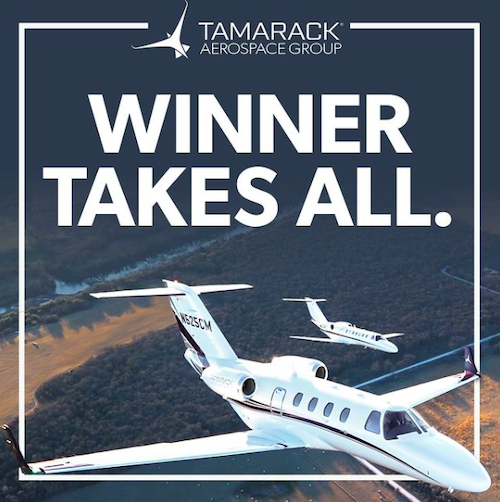 Loading comments for Tamarack Aerospace is ready for Fly-Off between a flat-wing and active winglet CJ...