Action Aviation chairman and world record holder/explorer Captain Hamish Harding has returned from the South Pole with his son Giles Harding, 12, and Prince Ned Nwoko of Nigeria. The expedition makes Giles Harding the youngest person to ever visit the South Pole and Prince Ned Nwoko the first Nigerian to visit. The party set out from the coast of Antarctica on the Cape Town side of the continent in an upgraded 1943 DC3 turboprop aircraft with skis to reach the pole. The party reached the pole on January 12, 2020.

The expedition raised awareness about the Eradication of Malaria in Africa project, driven by the Prince Ned Nwoko Foundation. Malaria kills 500,000 people a year in Africa. Prince Ned Nwoko is supporting research for a malaria vaccine with an initial $750,000 donation and substantial plans for eradication projects within Nigeria. The team unfurled a Nigerian flag at the pole emblazoned with the words “Let’s Eradicate Malaria in Africa.”

“Visiting here again, this time with my son Giles and friend Prince Ned Nwoko, is a wonderful end to an exciting 12 months,” says Harding, who previously accompanied astronaut Buzz Aldrin to the South Pole in Dec. 2016. Aldrin, at 86 years old, became the oldest person to visit the South Pole.

“While our One More Orbit mission in July 2019 was an adrenaline-fueled 47 hours around the planet, doing something with people you care about -- for a cause you believe in ­-- is a deeply fulfilling process.” “It was all really awesome,” says Giles Harding. “I don’t normally get to feel temperatures like -30°C. I’m worried about climate change and I learned a lot more about that on this journey. I saw things I hope will be there for more kids to see in the future.” 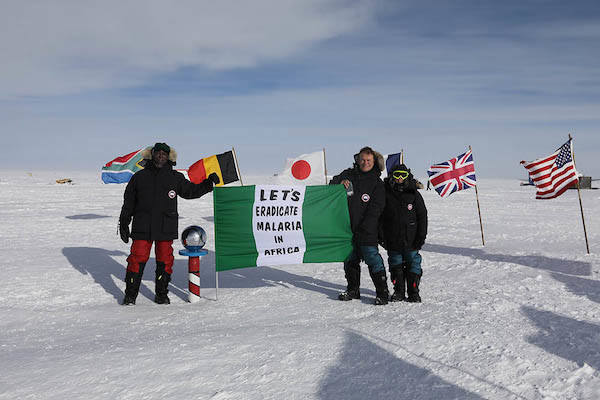 In July 2019, Captain Harding set a new GUINNESS World Record with astronaut Col. Terry Virts in a Qatar Executive Gulfstream G650ER business jet for the fastest circumnavigation of the Earth via both poles. The project, One More Orbit, celebrated the 50th anniversary of the Apollo 11 moon landing. It also raised awareness about the importance of carbon reduction in aviation by more than offsetting the carbon of the entire mission with the help of The Carbon Underground.

Action Aviation and One More Orbit plan to support the Prince Ned Nwoko Foundation with aviation assets to assist in their “Eradication of Malaria in Africa” initiative. 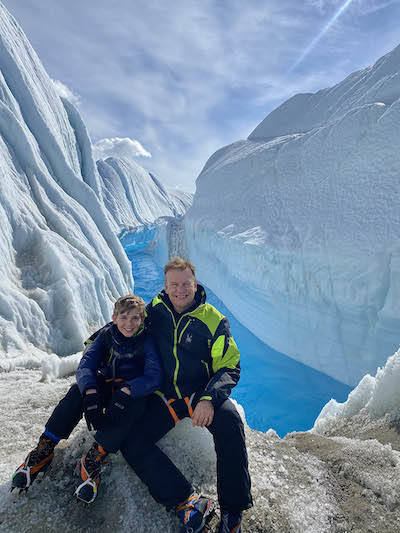