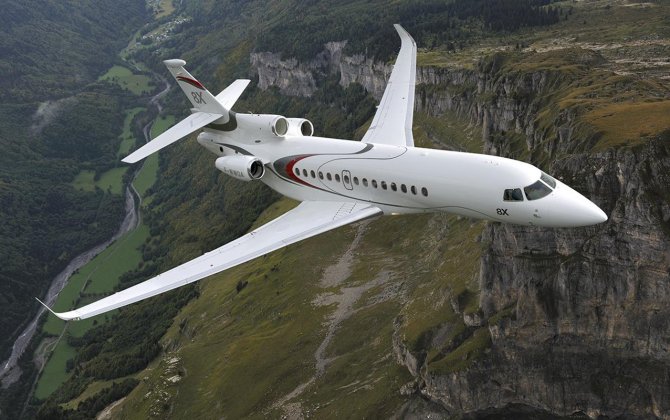 With recent deliveries to China and Russia, the new Falcon 8X ultra-long range trijet is now in service in all major markets around the world.

Since its service introduction one year ago, the 8X has been delivered to customers throughout the United States, as well as in Europe, Russia, South America, the Middle East and Asia.

The 6,450 nm/11,945 km trijet provides customers with increased range and cabin volume compared to the Falcon 7X from which it was derived. The additional range allows it to comfortably fly ultra-long intercontinental routes like Las Vegas to Beijing, Sao Paulo to Moscow or Hong Kong to London, non-stop. Or alternatively, from Los Angeles to Shanghai or anywhere in Europe.

In Russia and Brazil, two areas where Falcons -- in particular the Falcon 7X -- have long enjoyed a strong market presence, multiple Falcon 8X’s are already in service.

Feedback from operators has been universally positive, most importantly with regard to cabin comfort, flying stability and cabin sound level. This is a tribute to the aircraft’s outstanding wing dynamics, digital flight controls and sound insulation systems – the most advanced in business aviation.

The aircraft’s lightweight, cost-efficient design, inherited from the 7X, allows operators to save money on fuel and operating costs, another strong asset. The maximum take-off weight of the 8X is 73,000 pounds, compared to about 100,000 pounds for other aircraft in its class.

The FalconEye Combined Vision System, the first HUD in business aviation to combine synthetic and enhanced vision capabilities in a single view, ensures increased situational awareness in all conditions of operation, day and night, and will also yield substantial operational improvements, including a 100-ft decision height. Almost all Falcon 8X customers have elected to add the FalconEye option.

The Falcon Sphere II integrated electronic flight bag suite greatly reduces the time and effort necessary to prepare and manage business jet missions while moving operators closer to a truly paperless cockpit. It is delivered with a lightweight, ultra-thin portable display and a vast array of new app functionalities, including a Weight and Balance Module, Electronic Cruise Computation and Falcon Performance.

The 8X’s Ka-band broadband connectivity capability, based on the new JetWave high-speed broadband antenna, enables passengers to browse the internet, stream videos or videoconference anywhere in the world, over land or over water, as if they were in their office or at home, using Inmarsat’s Global Xpress Ka-band satellite network.

The 8X was also recently approved for operation at London City Airport, making Dassault the only manufacturer to have its entire in-production model lineup certified for one of the world’s most challenging airports.

In conjunction with Sealand Aviation, RED Aircraft anticipates that the first flight of a modified DeHavilland Beaver DHC-2 will take place very soon. The revolutionary RED A03 engine has already...

Legacy Flight Training has received FAA certification for use of the new Frasca flight simulator for the Piper M600/SLS in their initial and recurrent training curriculum at their training facility on...