First of all, TBM 940 got a warm welcome for its public debut. And second great news - the sale of a TBM 910 very fast turboprop aircraft in the Model Year 2019 version to a European customer.

This ninth evolution of the TBM product line is characterized by an increased level of automation in the cockpit. Aligned with Daher’s TBM e-copilot® strategy of introducing increased functionality for operational safety improvements, the TBM 940 features an automated throttle and automatic icing detection system – both of which are firsts for a production turboprop aircraft in the TBM’s weight category.

Chabbert added that customer response to the TBM 940 is promising, with 25 orders already booked and discussions underway for many more. One of the sales was made today at the AERO Friedrichshafen show by Rheinland Air Service, TBM Authorized distributor for Austria and Germany, to a German customer, for a september delivery.

The TBM 940’s integrated autothrottle system automates the engine’s power control and monitoring. Fully integrated with the aircraft’s autopilot, the GMC 711 AT controller decreases a pilot’s workload with such new modes as the selection of vertical speed (VS) or indicated airspeed (IAS). During the climb phase, the pilot no longer needs to continuously adjust the throttle to reach the optimum torque – thereby providing improved safety in flight and additional protection for the engine.

In addition, the engine parameters are now displayed on an intuitive smart engine indicator on the Garmin G3000 flight deck that indicates the limits with different color codes (green, amber and red) for torque, interstage turbine temperature (ITT) and gas generator RPM (Ng).

The TBM 940’s automatic icing detection system provides automated protection while keeping the pilot fully in the loop. When icing or ice accretion is detected by an externally-mounted sensor – and if the pilot does not take action – the automatic icing detection system will activate deicing devices on the airframe, windshield, propeller and the engine’s particle separator. An amber CAS (Crew Alerting System) message is displayed by the avionics, advising the pilot to clear the automatic activation and revert to the manual control mode.

In the TBM 940’s cabin, an enhanced interior combines comfort and aesthetics with redesigned seats and the addition of practical amenities. Among these is a new central shelf with side storage and USB ports, bringing the total number of USB ports available for passengers to six, with three for pilots. A 115 Volt universal plug complements the 14 Volt cigarette lighter socket, allowing occupants to use a wide range of electrical devices in the cabin.
The TBM 940 offers the same range, performance and technical features that have contributed to the success of the TBM 900 and its derivatives.

The airplane – sold by Rheinland Air Service, Daher’s authorized TBM distributor for Austria and Germany – is on display at Hall A3, Booth #321 during the AERO Friedrichshafen event, being held April 10-13 at Friedrichshafen Airport.

“We are pleased that the latest TBM 910 version is meeting the expectations of European customers, who recognize our commitment to using intelligent functionality in further improving safety and operability,” said Nicolas Chabbert, Senior Vice President of the Daher Airplane Business Unit. "These new standards redefine the ultimate private aircraft: user-friendly, safe and efficient for both pilots and passengers.”

In a new step aligned with Daher’s TBM e-copilot® strategy of reducing pilot workload and supporting safe flight operations, the TBM 910 has an automatic icing detection system that provides automated protection while keeping the pilot fully in the loop.

When icing or ice accretion is detected by an externally-mounted sensor – and if the pilot does not take action – the automatic icing detection system will activate deicing devices such as the airframe, windshield, propeller and the engine’s particle separator. An amber CAS (Crew Alerting System) message is displayed by the avionics, advising the pilot to clear the automatic activation and revert to the manual control mode.

As the entry-level member in Daher’s TBM product line, the TBM 910’s Model Year 2019 definition also includes G1000 NXi avionics suite features that are incorporated in the high-end G3000 advanced flight deck of the TBM 930 and TBM 940 aircraft versions. They are: Surface Watch™, which helps the pilot maintain enhanced situational awareness in the airport environment; Baro VNAV, allowing approaches with vertical guidance when Wide Area Augmentation System (WAAS) navigation is not available; and visual approach assistance for the TBM pilot in performing visual approaches on non-controlled airports with vertical guidance.

In the TBM 910’s cabin, Daher has incorporated ergonomic and style upgrades for 2019 that range from redesigned seats, additional thermal insulation for the cabin sidewalls and a new central shelf with side storage to an additional 115V electrical outlet at the right rear seat panel, and USB ports (bringing the overall total of USB ports to six for passengers and three for the pilots). 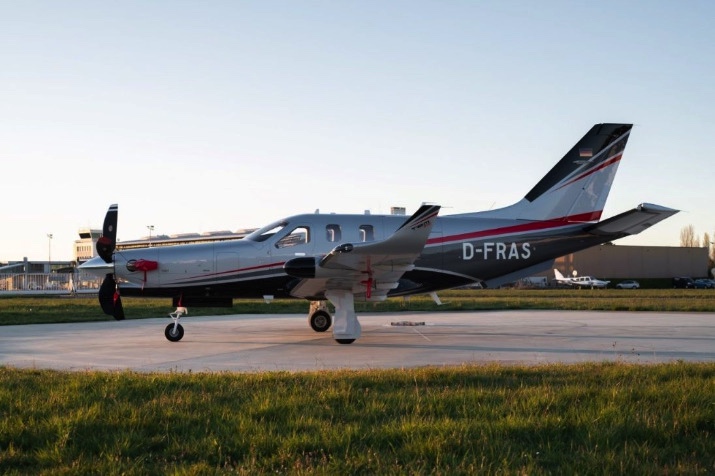