Lockheed Martin's LM-100J commercial freighter aircraft will make its international debut at the 2017 International Paris Air Show. The aircraft will be on static display June 19-21 at Paris-Le Bourget Airport. 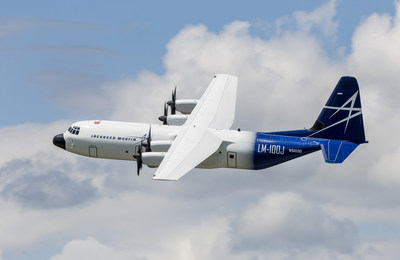 "The LM-100J has performed remarkably well in flight tests just two weeks after its first flight. Because of this strong performance, we decided to fly the LM-100J to Paris to be on display at the world's greatest airshow," said George Shultz, vice president and general manager, Air Mobility & Maritime Missions at Lockheed Martin. "The LM-100J's presence at the Paris Air Show truly places it on the world's stage, offering an opportunity to highlight its proven capabilities and unmatched versatility to the global commercial marketplace. We are honored to introduce the world to the LM-100J!"

Members of the media are invited to tour the LM-100J daily from 12:30 to 1:30 p.m. local time. Reporters do not have to RSVP and can arrive at the aircraft with show press credentials.

Members of the media are also invited to a C-130J Super Hercules media briefing at 10 a.m. on Tuesday, June 20. An LM-100J program update will be provided and news about a C-130J military variant will also be shared. The event will be held at Salle 2 in the Paris Air Show Media Centre.

Embraer has signed a multi-year services agreement with Alliance Airlines, which will provide materials support for the carrier’s fleet of E190s. Through Embraer’s Services & Support p...

Legacy Flight Training has received FAA certification for use of the new Frasca flight simulator for the Piper M600/SLS in their initial and recurrent training curriculum at their training facility on...

The next generation of CityAirbus - safe, sustainable, and fully integrated UAM solution

Airbus has announced plans for a new CityAirbus at the Company’s first #AirbusSummit on “Pioneering Sustainable Aerospace” as the emerging Urban Air Mobility market begins to fi...