The second day was the most intense in terms of the number of events of the Business Program, presentations, briefings and negotiations. In order to provide comfortable working conditions for the specialists who participated in the events, the duration of the demonstration flights was reduced.

At MAKS-2019, the first transactions with aircraft were signed. Agreements of intent for the delivery of the latest MS-21-300 medium-haul aircraft were signed with three operators: the Russian airline Yakutia for five airliners, the Kazakh company Bek Air for 10 units and with an uncoordinated customer for five more. Delivery start dates and other material terms are not disclosed. Currently, the MC-21's portfolio of solid contracts is 175 aircraft, with agreements of intent and memoranda of understanding covering another 160 aircraft.

Another deal concerns the delivery of Superjet 100 aircraft. The state transport leasing company and the airline Azimut have reached an agreement on the transfer of two such vehicles to the operator. Tus, as early as November 2019, Azimut's fleet will have 10 SSJ-100 aircraft, and the eleventh airliner will be delivered to the fleet in the future.

Helicopter builders also opened a sales account for aircraft at MAKS-2019. Russian Helicopters, Gazprombank Leasing and Norilsk Avia signed an agreement to supply 10 Mi-8AMT helicopters. Deliveries will take place in 2020-2024. The helicopters will be operated in the severe climatic conditions of the Far North, performing passenger transportation, sanitary missions and serving the interests of Norilsk Nickel. For the leasing company Gazprombank Leasing, this transaction became the first precedent for financing deliveries of new Russian-made helicopters.

The BP-Technology Design Bureau, part of Russian Helicopters, has taken an important step in promoting the VRT500 light multipurpose helicopter in the South East Asian market. During MAKS-2019, the developer signed a dealer agreement with the Malaysian company Ludev Aviation, which expressed its intention to purchase five helicopters. The first deliveries are expected to take place in 2023.

The second day of MAKS-2019 was extremely productive for Novikombank, the general partner of the salon. The first agreement signed with Irkut Corporation provides for the financing of the MS-21-300 certification and serial production of the aircraft in the amount of RUB 10 billion.

Another agreement, also worth RUB 10 billion, was concluded between Novikombank and the Aeronautical Complex named after M.V. Lomonosov. S.V. Ilyushin. The funds are intended for the implementation of the company's promising projects, including financing the production of IL-96-400M and IL-114-300 civil aircraft.

"Novikombank will provide financing for the projects of Rostvertol and Progress n.a. N.A. Lomonosov that are part of the Russian Helicopters holding company. N.I. Sazykina". The funds in the amount of about 10 billion rubles for each of the enterprises will be used to ensure the deployment of advanced helicopters. The innovation is the financing scheme of the Ka-62 helicopter production project in Arseniev, Primorsky Krai, which provides a preferential loan from the Industry Development Fund.

The program of work of the specialists of the enterprises included in the Russian Helicopters Holding Company was no less intense. In addition to agreements with Novikombank 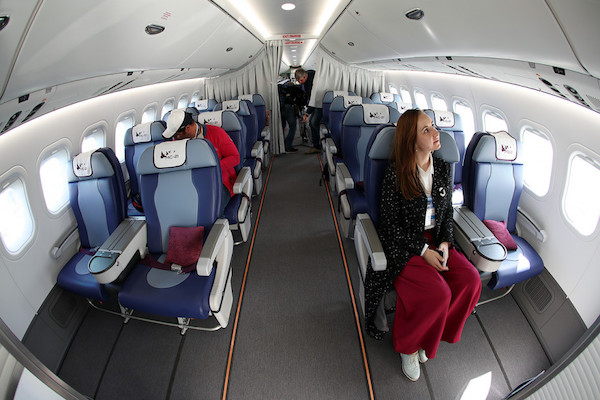 Third day - Despite the fact that a significant part of the planned signing of contracts, conferences and round tables, presentations and briefings took place in the first few days, the work at the site remained very intensive. Emphasis was placed on the presentation of promising projects, forecasts and events for young people.

Russian Helicopters Holding Company and Polar Airlines signed a contract for the delivery of seven upgraded Ansat helicopters. The helicopters will be adapted for use in the Far North: they will be stored without bezangars and equipped with a de-icing system. As a result of the modernization, the flight range will be increased, and it will be possible to perform instrument flights. Deliveries will begin in 2021.

The state transport leasing company signed an agreement with Sky Light, a member of the Aim of Emperor group of companies, on the implementation of an air taxi project. The parties are considering entering into a leasing agreement for HondaJet Elite aircraft

The third day of work continued with meetings on the MatchMaking system. The business potential of negotiations, calculated on the basis of the analysis of questionnaires of participants, amounted to 820 million rubles.

Participants of the MAKS-2019 Business Program continued their intensive work both in the framework of conferences, seminars and round tables, and in the format of bilateral meetings on the 29th of August.

The United Aircraft Corporation (UAC) presented a review of the civil aircraft market for the period 2019-2038. According to UAC experts, airlines worldwide will need 44,310 new aircraft for the next 20 years, worth $6.35 trillion in catalogues in 2019.

The Russian segment of the market is estimated at 2.9% in value and 3.3% in quantitative terms of the global market as a whole. Including 632 narrow-body aircraft with a capacity of 166-200 seats, 209 boards with a capacity of more than 200 seats and 196 - up to 165 seats. Wide-fuselage aircraft are in less demand - 63 airliners with moderate capacity of 200-300 seats and 78 vehicles designed for more than 300 seats. The catalogue cost of these planes is estimated at $182 billion.

On Thursday, a meeting of the Committee for Instrumentation, Control Systems, Electronic and Electrical Industry of the Russian Engineering Union took place. The specialists discussed the issues of creation and certification of onboard radio electronic equipment for SSJ-NEW, MS-21, IL-114 aircrafts.

Scientists of the Zhukovsky Central Aerohydrodynamic Institute actively worked on the MAKS-2019 site. During the three days of the salon's operation, the Institute's management was in constant negotiations with the delegation of the Chinese Academy of Aerospace Aerodynamics. The main topic of discussion was cooperation in the field of experimental research.

As part of the business program, the results of the contest of innovative projects in the aerospace industry, organized by TsAGI, were summed up. The finalists demonstrated their creative initiatives and practical steps to implement them. A distinctive feature of this year was the emphasis on such topical issues as providing remote areas of Siberia, the Far East and the Arctic with modern aircraft, including unmanned aerial vehicles; aviation mobility in urban agglomerations, new composite materials, etc. The winner of the contest was the project "Development of technological vibration damping means for low-rigid parts and tools for manufacturing high-tech elements of aircraft structures by milling and turning".

The Congress Centre hosted a number of events, including a round table on "Modernization of production capacities of industrial enterprises with attraction of budget investments" organized by the Ministry of Industry and Trade of Russia and FSUE Aviakomplekt, a forum on "Introduction of additive technologies in the aviation industry of Russia", a conference on "Pre-professional competences as a modern condition of efficiency of specialists of the industrial complex", a conference on "How to manage power lines with the help of drones", and other events.

As the days of the public visit approach, the participants of the air show arrive at the airfield of the Flight Research Institute. On August 28 and 29, aerobatic aerobatics groups "Russian Knights", "Falcons of Russia" and "Strizhi" conducted qualifying flights.

Arriving at the exhibition, the First Flight aerobatic team surprised all the guests of the cabin: five sports planes passed over the airfield, releasing heated oil clouds, which were formed in the air in the name of MAKS 2019. It was the first demonstration of "air printer" in our country.

Another surprise was presented by Technodinamika Holding: its parachutists deployed the flags of Russia, Rostec State Corporation, Technodinamika and Russian Helicopters holdings, Radioelectronic Technologies Concern, United Aircraft Corporation and United Engine Corporation during the flight program. The flag of the Russian Federation is made on a 20 to 30-meter-long cloth.

The second day of MAKS-2019 was attended by 51,370 people. According to the information of the operational headquarters, violations and emergency situations were avoided.

Loading comments for MAKS-2019 - results of the second and third day of the air show...

SalamAir has taken delivery of its first A321neo aircraft. The efficient A321neo delivers high levels of passenger comfort while expanding seating capacity through optimised use of cabin space. T...