The Sarang Helicopter Display Team has evolved from the Advanced Light Helicopter (ALH) Evaluation Flight, which was formed at Bengaluru in 2003, to evaluate the indigenous helicopter ‘Dhruvʼ, prior to its induction into operational service. True to its name the ALH has been a guiding beacon, standing out like the Pole star in the Indian Aviation sector. A true icon of MAKE IN INDIA.

In June 2004, the Flight was converted into 151 Helicopter Unit and the fledgling team was rechristened ‘Sarangʼ, which in Sanskrit, means Peacock, the National bird of India. The synchronised aerial ballet of four brightly painted metal birds draws comparisons with the graceful Peacock! The Unit moved to Yelahanka and subsequently to Sulur, near Coimbatore in 2009, where it has been based since.

As “Brand Ambassadors of the Indian Air Force”, the Team was tasked with the onerous responsibility to build upon and showcase its display flying capabilities. The Team set the ball rolling with its maiden public display at the Asian Aerospace Airshow in Singapore in 2004. Thereafter there was no looking back! The team performed at various international venues such as Chile, UAE, Berlin, Waddington, Biggin Hill, United Kingdom, Fairford, Farnborough, Bahrain and as recent as the air display at Mauritius in March 2018 on the occasion of their 50th national day.

While it is natural to expect daring manoeuvres and precise formation by fixed wing aircraft, it is notably difficult to do the same in helicopters owing to the unstable nature of rotary wing flying. One would find a handful of helicopter display teams across the globe and this makes the Sarang Helicopter Display Team so unique. Display flying involves walking the thin line between bravery and foolhardiness. While manoeuvring in close proximity to three other rotor discs in close proximity of ten metres, there is no room for error. Moreover to demand the very best out of this beautiful machine and coax her to give that extra bit in display flying, the Team needs the best pilots on offer. Therefore only those pilots who are handpicked after a rigorous selection process make the cut from a large number of volunteers. The skills and temperament required for display flying are acquired and honed through rigorous training, confidence in oneʼs own flying ability and the faith in his/her team members.

The team is lead by Wg Cdr Girish Komar, a qualified flying instructor and an Instrument rating instructor and examiner. He has been one of the pioneers seeing through the fledging Sarang team to today’s one of its kind in the world. the team commentator who makes the display more lively connecting aerobatics and the audience. 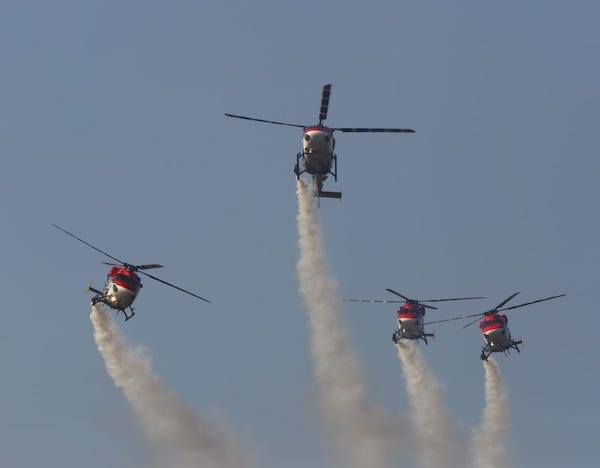