With less than two weeks until the start of the inaugural Saudi International Airshow,  organisers have announced that AMMROC, has joined the growing line up of sponsors for the new event.  Headquartered in Abu Dhabi, UAE, Advanced Military Maintenance Repair and Overhaul Centre (AMMROC) is a leading provider of military aircraft maintenance, repair and overhaul services across the South Asia, Middle East and North Africa (SAMENA) region supporting  more than 35 fixed and rotary wing aircraft types.

With the addition of AMMROC to the sponsorship roster organisers are also confirming that  some 80 aircraft are booked for the static display, more than 200 exhibitors are signed up, and registrations stand at over 13, 000 representing visitors from some 50 countries. Situated just outside of Riyadh, Thumamah Airport, the 2019 show will connect the world’s aviation experts and industry players to Saudi Arabia. The event has been organised in response to a huge demand from leading regional industry professionals and will be the first in a series which will take place over the next five years.

Saudi International Airshow, which will debut from the 12th to the 14th of March 2019 at Thumamah Airport, Riyadh, will be the first aviation & aerospace exhibition of its kind in the Kingdom of Saudi Arabia. Exhibitors and delegates from across the world will be welcomed to Thumamah Airport which will be dedicated solely to the exhibition.

Saudi Airshow will host a mix of business, general, commercial aviation and aerospace exhibitors on a 100,000 sqm static area which will accommodate more than 80 aircraft ranging in size from single-engine and executive jets to commercial wide body aircraft. The show will offer chalets located next to the runway to enable manufacturers to present their entire range of aircraft and to facilitate demonstration flights. In addition, exhibition hall will host more than 200 booths, national and international pavilions where exhibitors will showcase a full range of aviation and aerospace services and products. 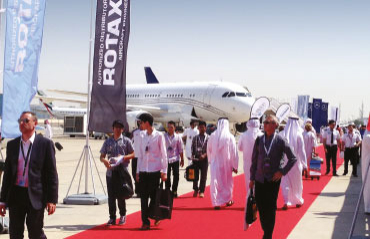 Garmin has received FAA Supplemental Type Certification for the GFC 600 autopilot in the King Air 200 series of aircraft. The GFC 600 digital autopilot is designed for high perform...

The prospects for a career in aviation have rarely been as positive as they are today. The aviation industry is just taking off again and urgently needs qualified specialists in all areas. With the AE...