The debut of EUROPEAN ROTORS, the new trade fair and conference for VTOL aircraft was a great success: More than 150 exhibitors, visitors from 36 nations, over 65 accredited journalists and several world and European premieres showed the high demand of the industry to meet again in person and to shape the restart after the global pandemic.

• 25 percent of exhibitors have already booked spaces for next year

The premiere of the new trade fair for rotorcraft, EUROPEAN ROTORS, exceeded the expectations of the organisers: The show floor was completely booked with over 150 exhibitors, the number of visitors had reached the maximum allowed by the authorities and the extensive conference programme was very well received. At EUROPEAN ROTORS there were several world and European premieres of new aircraft, like the unveiling of the new CityAirbus NextGen and the eMagic One from eMagic Aircraft. Exhibitors also reported the conclusion of sales contracts for new helicopters. Bell Textron for example has received orders for Bell 505 and Bell 429 aircraft during the show. Over 25 percent of the exhibitors took the opportunity to book on-site their participation for the next edition of EUROPEAN ROTORS.

The concept of the show as an open platform for all members of the rotorcraft community like OEMs, operators, engineers and regulators, was very well received by exhibitors and visitors. The show covers the entire civil sector of the VTOL industry, from rescue missions (HEMS/Helicopter Emergency Services) to firefighting, offshore, VIP transport and law enforcement missions. EUROPEAN ROTORS is jointly organised by the EHA (European Helicopter Association) and EASA (European Aviation Safety Agency).

EHA Chairman Peter Moeller says: “The European Helicopter Association is grateful for the large number of exhibitors and visitors who came together to make this show such a success. After the show is before the show. Don't miss out the opportunity to go to our website https://www.365.europeanrotors.eu/en to see the seminars you might have missed here in Cologne and to prepare yourself for the next EUROPEAN ROTORS which will take place from November 8 to 10 here in Cologne."

European Union Aviation Safety Agency (EASA) Executive Director Patrick Ky said: “This was an impressive event for the rotorcraft community. Like many other attendees, I appreciated the opportunity to meet face to face and see the latest products in a live environment. I trust that the participants in the EASA Symposium found the sessions interesting and useful. I believe we will see this dynamic event growing in future years and becoming a firm fixture in the rotorcraft calendar.  I would like to thank our partners EHA, my EASA colleagues and all the organisers and exhibitors for their hard work in putting this event together, despite the challenges of the pandemic."

Dr. Frank Liemandt, the Show Director of EUROPEAN ROTORS, says: “We have made our promise a reality and created a platform where all participants of the VTOL community can meet, exchange and do business. We have created a safe environment for such a trade show through extra wide aisles. The German COVID regulations were observed.”

He points out: "We are launching today our digital format EUROPEANROTORS365, which can be found on the website at https://www.365.europeanrotors.eu/en, where we will gradually put the conference contents online for all interested parties who could not come to EUROPEAN ROTORS themselves."

EUROPEAN ROTORS will take place annually from now on. Next year it will once again be hosted in Cologne at Koelnmesse. The date of EUROPEAN ROTORS 2022 is 8 to 10 November. 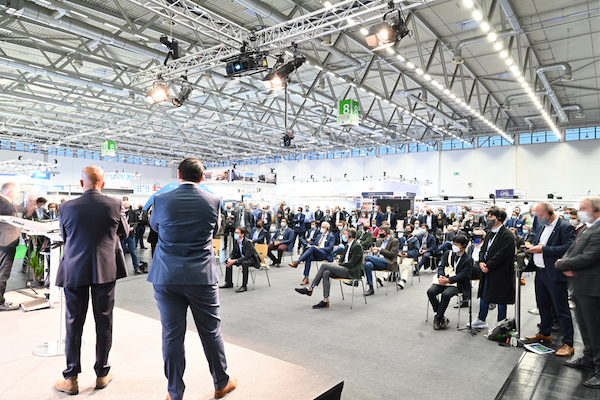