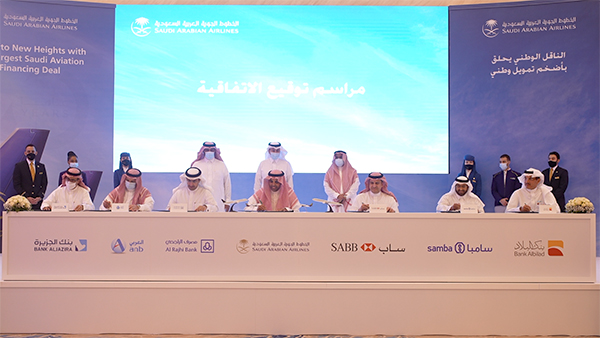 The agreement aims to partially finance the acquisition of 73 new aircraft (previously announced), covering the corporation’s aircraft financing requirements to mid-2024. Saudi Arabian Airlines Corporation completed the purchase agreements for Airbus and Boeing aircraft, including 20 A321neo, 15 A321XLR, as well as 30 A320neo for flyadeal, and eight Boeing 787-10. Of these, five Boeing 787-10 aircraft have been inducted into the corporation’s fleet so far.

“The robust capacity from our national flag carrier in partnership with the six local banks to conclude the financing structure of this size, for the first time in Saudi Arabia’s aviation history, reinforces the strength of the Saudi banking sector. The corporation will play a key role in contributing to the overall growth of the Saudi economy by attracting more tourists and pilgrims to the Kingdom. The global economy will ultimately recover, and we want to ensure that we are fully-prepared and well-positioned early on to meet the demands of inbound and outbound passengers by serving them to the highest standards,” H.E. Engr. Al-Jasser added.

Commenting on the agreement, Director-General of Saudi Arabian Airlines Corporation, H.E. Engr. Ibrahim bin Abdulrahman Al-Omar remarked, “We are proud to partner with the top financial institutions in Saudi Arabia to lead the aviation sector’s recovery amid uncertain market conditions. This financing agreement demonstrates our resilience as well as our determination to capture opportunities in securing competitive funding to enable our fleet expansion with a range of new and modern aircraft that will enable us to meet the national aviation requirements in the years to come.”

Though the airline industry has been going through a challenging phase in 2020 and 2021, the total bids received for this financing exceeded SAR 18 billion (USD 4.8 billion), which shows the market’s confidence in Saudi Arabian Airlines Corporation’s strategic long-term plans and its ability to deliver substantial growth in line with Saudi Vision 2030.

Even as several international airline companies were shrinking their businesses in the past 18 months, Saudi Arabian Airlines Corporation continued to focus on improving its facilities with the aim of capturing a sizeable market share when the market rebounds. By expanding its fleet with state-of-the-art aircraft from top manufacturers in the global aerospace industry, the corporation also aims to further enhance its world-class passenger experience.