Safran Landing Systems has signed a five-year contract with the Chinese airline China Eastern to carry out maintenance operations on the landing gear of 31 Airbus A330s. These operations will take place at its Singapore workshop.

SONG Shaokun, CEO, Eastern Airlines Technics (Eastec): “Being the affiliate of China Eastern Group, EASTEC specializes in aircraft maintenance and engineering services, covering full life cycle of aircraft. Safran is our close cooperative partner, who shares the same target and vision. We will continue reinforcing our cooperation with Safran, jointly devote to provide high-quality services to all customers including China Eastern.”

Bruno CHIARELLI, Executive VP MRO, Safran Landing Systems: "We are proud to have been chosen by China Eastern to carry out these MRO operations. The new agreement strengthens our long-standing relationship of trust with China Eastern. The joint company we set up in Xi’an in 2016 specializes in landing gear maintenance for single-aisle aircraft."

The Singapore workshop is a joint venture with SIAec (Singapore Airlines Engineering Company), which has over 300 employees specializing in landing gear revision. Over 9,000 landing gear have been revised there, to date.

The contract is part of our Landing LifeTM support and services offer, which covers all Safran Landing Systems' after-sales business and aims to provide a responsive, reliable and good-value service. 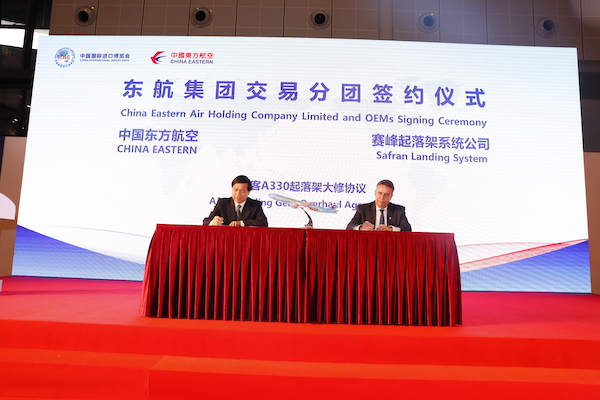 Loading comments for Safran chosen by China Eastern for MRO operations on the landing gear of its Airbus A330 fleet...