A350F: Five reasons why it will deliver freight in a smarter way

Based on the top-selling all new A350, the A350F brings latest-generation efficiency and choice to the large freighter market. If there are five things to know about the A350F they would be as follows:

Unbeatable efficiency and sustainability
With advanced aerodynamics and equipped with Trent XWB engines, the aircraft offers unbeatable efficiency in terms of fuel burn, CO2 emissions and economics – versus any other large category widebody freighter in operation today (eg 747F and 777F) or on the drawing board – such as the proposed 777-8F. This higher efficiency for the A350F is a decisive advantage versus the 2028 in-production deadline for the ICAO CO2 standard. The A350F’s advanced technology enables a step change of up to 40% better economic and fuel efficiency versus older generation freighters, such as the 747F.

Nose to tail innovation with advanced materials for reduced maintenance high availability
The A350F is much lighter and less maintenance-intensive than its competitors, largely thanks to its structure which comprises over 70% advanced materials such as composites, titanium and modern aluminium alloys. Notably, the wings, the centre wing box and also the fuselage panels are manufactured mostly with composites. These materials choices result in a lighter, stiffer, stronger, more capable and cost-efficient aircraft, while increasing resistance to corrosion and fatigue for reduced maintenance requirements. In fact, Airbus calculates that the A350F will provide its customers around 65 more revenue days due to less maintenance downtime versus the proposed 777-8F over 16 years, thanks to the A350F’s clean-sheet advanced materials and well integrated systems. Moreover, these predictions are realistic given the proven track record of the A350-900 and -1000 in service today which are delivering more operational availability for extra revenue for operators. Indeed, the A350 platform has consistently demonstrated around 99.5% operational reliability in almost five million flight hours to date.

Superior combination of economics, payload flexibility, volume and range
On top of the low fuel consumption which already contributes to major savings, the A350F’s unbeatable economics are also built on the three tonnes additional structural payload (for a total of 109 tonnes) compared with the 777F. Moreover, to do the same job as its current competitor, the A350F will weigh around 28 tonnes less at take-off due to its much lighter composite fuselage & centre wing box, while burning around 20% less trip fuel. This also means that operators of Airbus’ new A350F freighter will benefit from lower landing and navigation charges.

As for the proposed 777-8F, while the current estimates suggests that it could offer six percent more volume and seven tonnes more payload than the A350F, this would come with a hefty burden of at least 32 additional metric tonnes (32,000kgs) of take-off weight (Airbus’ initial estimate) – which increases fuel burn, CO2 emissions and airport charges.

A key aspect of the A350F is that this payload can be more evenly distributed along the length of its fuselage floor. This is possible because the A350F’s floor beams are designed with the highest running-loads in the industry, which is available for most of the main-deck pallet positions. By contrast, in the 777F the maximum running-load over most of its cargo floor is some 45% less than the A350F (apart from in the centre section where the floor is stronger in all aircraft).

The A350F’s higher running-load capability over more of the floor will provide superior pallet loading flexibility and C-of-G management. In particular, its operators will be able to utilise the full 6.8 tonnes maximum certified limit for a 96x125 pallet for 20 of the 30 pallet positions, whereas the 777F only offers six pallet positions with a 6.8t pallet capability – with all the rest being limited to a maximum loading of only around four tonnes where the floor loading is more limited.

Mention should also be made of the A350F’s composite main-deck-cargo door (MDCD). With a clear opening measuring 3.72m by 3.16m, it allows loading on board of all new large turbofan engines. Meanwhile, the flexibility of the main-deck cargo-loading system (CLS) inside the aircraft provides for up to six positions for these engines to be directly latched, instead of using straps. The use of latches not only minimises turnaround time, but also frees-up space adjacently for two extra pallets.

Another key requirement when defining the A350F was the capability to fly from Hong Kong to Anchorage – an industry benchmark mission as it is the most often flown cargo route in the world – at full payload. Accordingly, the A350F with 109t max structural payload can carry it over 4,700nm to enable this route, and do so with the lowest possible fuel burn and proportionally reduced CO2 emissions.

Smooth integration into airlines’ fleets
The A350F brings a real edge when looking at fleet integration, thanks to the Airbus Commonality, which extends from training to the aircraft and engine maintenance. For example, existing A350 operators can use the same flight crews and ground technicians as they already do today for their current A350 operations. In addition, the A350 and A350F share commonality for engine and airframe spares and tooling, leading to minimum additional investment and maximum operational flexibility and profitability.

With over 900 A350s sold over the world, the family benefits from an outstanding Airbus support – which will seamlessly extend to the A350F once that enters service. The A350F will thus take advantage of this proven platform that has already demonstrated strong maturity and a reliable support network, carried by the same Airbus representatives.

The future-proof choice
Overall, the A350F is tailored to handle all future requirements for the large freighter segment – which Airbus forecasts will induct around 540 new aircraft for growth and replacement by 2040 to serve the general freight, express and e-commerce markets. For example, the A350F’s flexibility includes compatibility with the standard AMJ-type container in a side-by-side layout, which the express cargo companies use today. While for the general freight operators the aircraft also offers the right pallet cargo density of 9.5 pounds per cubic feet.

Moreover, with equal volume as the 747F, and three tonnes greater payload with 11% more volume than the 777F while offering more range, the A350F will deliver robust capabilities to ensure continuity for airline freight operations. In addition, it does all this while achieving 20% lower fuel and CO2 emissions than the current competitor, complying with all foreseeable environmental regulations.

Looking further ahead and further underscoring its ‘future-proof’ credentials, the A350F will also hold its efficiency advantage over any future fourth-generation derivative of the 777F such as the proposed 777-8F, notably thanks to the A350’s clean-sheet design with advanced materials that allow the Airbus aircraft to perform like-for-like missions with around 28 tonnes lighter take-off weight than the 777F and between 32 and 46 tonnes less weight than the 777-8F. 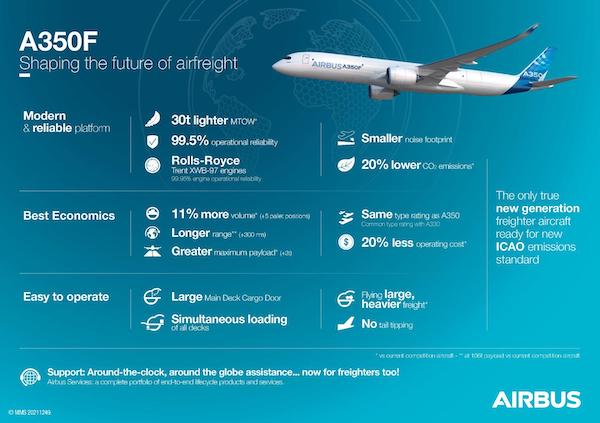 Loading comments for A350F: Five reasons why it will deliver freight in a smarter way...