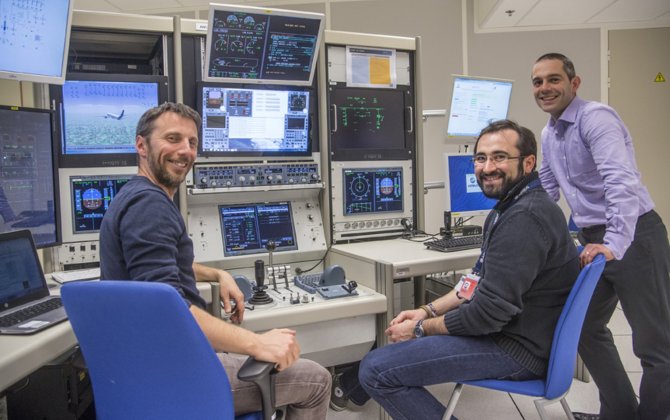 The first Airbus A350-1000, which was delivered to launch operator Qatar Airways last month, is equipped with a new safety feature that will now be standard across all A350-1000s. Called the automated emergency descent, or AED, this system engages the aircraft’s autopilot function to automatically and quickly bring the aircraft to a lower, safer altitude in the event of in-flight cabin depressurisation.

“Depressurisation events are extremely rare,” said Yann Besse, an autopilot laboratory test team engineer for Airbus. “Our goal was a simple system that provides significant workload alleviation when a rapid descent is required.”

The AED mode is triggered when the cabin pressure falls below a predetermined limit. After alerting the flight crew, the system engages the autopilot to bring the aircraft to a lower, safe altitude if there is no crew reaction within 15 seconds.

A pioneering Airbus application for safety

The AED’s use on the A350-1000 is the first application of its kind in a large commercial aircraft and demonstrates Airbus’ commitment to ensuring safety through what AED project leader Florent Lanterna termed “Airbus’ continuous improvement philosophy.”

Developing the brand-new system also meant evolving an innovative way for Airbus engineers to work across the company’s separate locations. The AED system requires a seamless interface between the aircraft’s autopilot and cabin pressurisation systems, explained Besse, and called for close collaboration between the engineers responsible for each system to integrate them.

“The autopilot test bench is in Toulouse, France and the cabin pressurisation facility is in Hamburg, Germany,” said Besse. An inability to connect the two sites “would have meant having to do the AED system’s testing on a real aircraft, which would take much longer.”

Toulouse and Hamburg team up

Members of the Toulouse autopilot test team went to Hamburg for meetings with their cabin pressurisation system colleagues, discussing how the respective systems work.

Ultimately, each site made modifications to their bench networks that enabled the Toulouse and Hamburg facilities to connect in real-time, allowing fully representative testing at both sites. Besse was impressed with the transnational collaboration the project required. “I want to thank Claas Heidmann, the A350 Air Systems test leader, and his colleagues in Hamburg,” he said. “This was a difficult project, one that lasted a year, and they brought a lot of enthusiasm and knowledge.”

With the AED system already standard on the extended-fuselage A350-1000 version, its certification for the shorter-length A350-900 variant is in progress and expected soon. “The global pilot community asked for AED, and Airbus test pilots have been very happy with it,” said Lanterna. “We’ll continue to collect user feedback with the A350 XWB and then explore whether to deploy it further.”