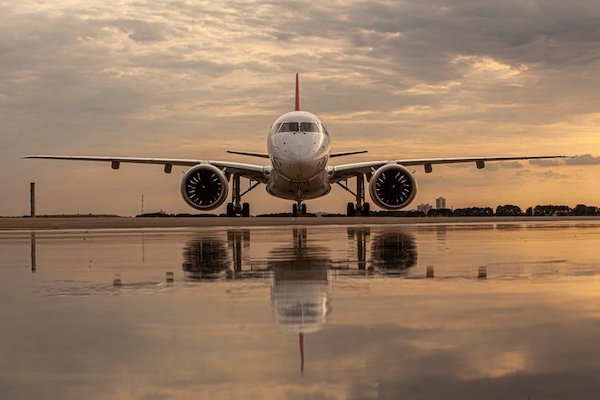 Congratulations Helvetic Airways! First E190-E2 Jet Received! A special ceremony was held in Zurich, to celevbrate official reception of first Helvetic Airways E190-E2 jet from Embraer! The airline has a contract for a firm order of 12 jets of this model, and purchase rights for a further 12 E190-E2, with conversion rights to the E195-E2, bringing the total potential order up to 24 E-Jets E2s.

“As the only Swiss airline to operate Embraer aircraft, Helvetic Airways already stands out from the competition,” said Martyn Holmes, Vice President Europe, Russia & Central Asia, Embraer Commercial Aviation. “And, with our state-of-the-art E190-E2, it now has the perfect aircraft, in terms of environmental sustainability and to maximize the profitability of its flight operations.”

Helvetic Airways CEO Tobias Pogorevc is pleased to have achieved this milestone. “After more than eighteen intensive months,” he commented, “it’s a sense of accomplishment that we feel most today. With the E190-E2, Helvetic Airways is entering a truly new era. Our state-of-the-art twinjet will make us one of Embraer’s leading European operators. And it gives us just the modern and environmentally friendly aircraft we need to continue our development.”

This E190-E2 aircraft marks the start of Helvetic’s fleet renewal program. The purchase rights for a further 12 aircraft (E190-E2 or E195-E2) will enable Helvetic Airways to grow according to market opportunities. Helvetic Airways is configuring the E190-E2 in a single class layout with 110 seats and will deploy the aircraft on several domestic and international routes.

The E190-E2 also generates significant savings for airlines in terms of maintenance costs. It has the longest maintenance intervals with 10,000 flight hours for basic checks and no calendar limit in typical E-Jets utilization. This means an additional 15 days of aircraft utilization over a period of ten years.

Pilots of the first-generation E-Jets require only two-and-a-half days of training without the need for a full flight simulator in order to fly the E2, which decreases the training burden and saves both time and money for the airlines. The E2 cockpit features advanced Honeywell Primus Epic 2 integrated avionics. Combined with the closed-loop fly-by-wire controls, the systems work together to improve aircraft performance, decrease pilot workload and enhance flight safety.

From the passenger’s perspective, the E2 cabin features a comfortable two-by-two layout. The absence of a middle seat enables passengers to have an enjoyable flight experience with more legroom and additional luggage storage space.

Embraer is the world’s leading manufacturer of commercial aircraft up to 150 seats with more than 100 customers across the world. For the E-Jets program alone, Embraer has logged more than 1,800 orders and 1,500 aircraft have been delivered. Today, E-Jets are flying in the fleets of 80 customers in 50 countries. The versatile 70 to 150-seat family is flying with low-cost airlines as well as with regional and mainline network carriers. 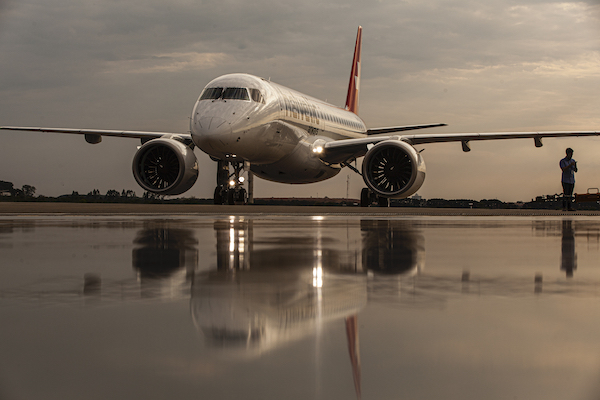