During a visit to the Dassault Aviation plant in Seclin, in northern France, the French Minister of the Armed Forces, Florence Parly, today announced the upcoming notification of a contract for the "Albatros" Maritime Surveillance and Intervention Aircraft (AVSIMAR) program, which will be based on the Dassault Aviation Falcon2000LXS. In accordance with the multiyear military spending bill, the contract will involve an initial order for 7 aircraft, with deliveries to start in 2025, out of a planned total of 12. Dassault Aviation and the dozens of French companies associated with the Falcon programs would like to thank the French Ministry of the Armed Forces, the French defense procurement agency (DGA) and the French Navy for once again expressing their confidence in us.

The Falcon 2000 Albatros will feature a multifunction radar under the fuselage, a high-performance optronic turret, observation windows, a SAR (Search & Rescue) kit release system and dedicated communication systems. In line with the aeronautical maintenance transformation policy initiated by the French Ministry of the Armed Forces, the Albatros contract commits Dassault Aviation to a guaranteed availability clause, favoring industrial support in close cooperation with Navy personnel for 10 years. 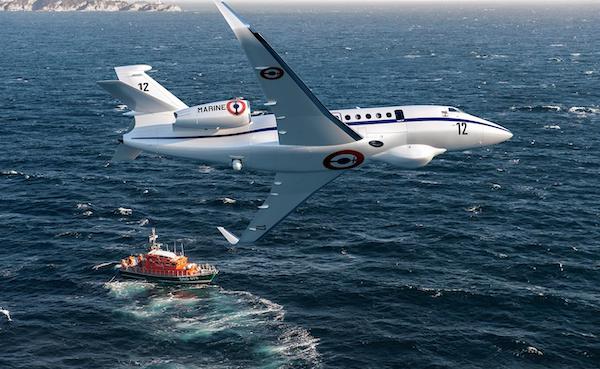 "The Falcon 2000 Albatros is a high-performance aircraft equipped with a mission system and sensors of the latest generation. From the Falcon 20 of the U.S. Coast Guard to the Falcon 2000MSA of the Japanese Coast Guard, as well as the Falcon 200 Gardian and 50M of the French Navy, we have extensive experience in maritime surveillance, in addition to our long experience in maritime patrol with the Atlantique", said Eric Trappier, Chairman and CEO of Dassault Aviation. “Several countries have shown interest in these aircraft, which provide an effective response to the considerable challenges of homeland protection and maritime security and government action at sea: fighting pollution and trafficking, surveillance of borders and exclusion zones, fisheries policing, search and rescue at sea, etc. It is only fitting that France, which has the world’s second largest exclusive economic zone, should be at the forefront in the use of this type of aircraft."

The first Falcons on which the program will be based will be manufactured in France. The remainder will be produced in India as part of the offset arrangements related to the 2016 Indian Air Force Rafale contract. The conversion of the 12 Falcon 2000LXS aircraft into the Albatros configuration will all be carried out in France.

Over the past 50 years, Dassault Aviation has modified many Falcon aircraft to adapt them for maritime surveillance, medical evacuation, cargo transport, calibration, intelligence-gathering, training, etc. These multi-role aircraft represent approximately 10% of the Falcon fleet in service. French government services operate Falcon 10, 200, 50, 900, 2000 and 7X aircraft, and will soon add the Falcon 8X aircraft in a strategic intelligence version under the Archange program.

These multi-role Falcon aircraft are a perfect example of the dual civil/military know-how of Dassault Aviation: they benefit from the cutting-edge technologies developed for our fighter aircraft and, at the same time, they take advantage of the industrial processes used in the highly competitive business jets market.