We must confess - it is a discovery for us- Tarragon aircraft. So we are willing to share it with you. And obviously the first - the story - where it comes from and how this project started.

It all begun in 2009 when Igors Zvjagins and Valentin Vasjak were in Italy and saw the MILLENNIUM MASTER for the first time in flight and were amazed by its design and performance. Then they had an idea - to build a better quality ultra-light plane ourselves. Then Pelegrin Ltd was founded, January 2010 and MILLENIUM MASTER Aircraft was built in less than 10 months. Thanks to Aivars Lejietis, who joined our team in 2012 as a main investor, we were able to develop and build a totally new aircraft, TARRAGON, that was designed by C.F.M. Air s.r.l. especially for Pelegrin Ltd. The experience of the team helped to eliminate a lot of the common mistakes in ultra-light design and construction in order to create a new generation of aircraft – TARRAGON. TARRAGON is lighter, faster and more aerodynamic.

​You might ask what is future vision for the company after unprecedented year 2020. Tarragon plans to export no less than 10 Latvian made aircrafts in 2021.​

These days private jets are not only used for travel, but also as means of transportation for everyday agendas – like aerotaxi for flights to work. Both Europe and the USA have developed their infrastructure for this, which makes you forget about standing in mundane traffic jams. The aim of Latvian aircraft manufacturer Tarragon is to produce as many of these aircrafts as possible in Latvia. Currently, among existing customers of Tarragon are a pilot for F1 and sportsman of MotoGP, whose names cannot be disclosed. Tarragons aircraft are ultralight their weight is only 337-380 kg, and they can reach the speed up to 370km/h allowing them to cover distances of up to 1300 km in one flight.

To obtain the right to fly, a pilot’s license is required, however such aircraft will be more suitable for an experienced professional. These aircrafts can fly at an altitude of 3-3,5 km. The ultralightness and aircraft manoeuvrability is achieved by usage of carbon fiber materials in the production of fuselage, which is similar to how Formula-1 cars are produced.

Ingemārs Butkevičs, representative for Tarragon and pilot commentyed: ” We have just moved the factory from Adazi to Riga, the area of the new site is 4500 m2. We work with the professionals in the field, nevertheless, we are happy to invite mechanics and CNC metalworking engineers to join our team. The production of single aircraft takes up to half a year, and we strive to increase our productivity. In the next year we plan to enter the Italian market, and the next market to research is French. These aircrafts are just like a favourite toy for a man. A private aircraft is more than just a vehicle - it is a style of military, it's exclusive, an aircraft that is designed individually for each client. You can choose the engine, propeller, paint design, avionics equipment, interior decoration - this is how clients dreams come true. The cost of one aircraft is about 200 thousand euros, and to receive a pilot's license you are required to pass a 9-month training course, which will cost around 4500 euros”.

With the development of small aircraft, flights are becoming more accessible and convenient. If previously, flying on a private aircraft, for example, abroad for a meeting was considered to be exclusive, this practice is now becoming more common in Baltic countries as well. Currently, a flight to Warsaw in a private aircraft is much more profitable than a commercial aircraft, as rational economy of time in business is crucial. For example, you fly out with Tarragon at 10:00, in 2 hours you arrive in the polish airport, at 13:00 you have a meeting, and at 15:00 you can already fly back, saving you both time and spending on hotel expenses. Within a day you are able to be at a meeting abroad and come back to Riga while only spending 200-250 euros. 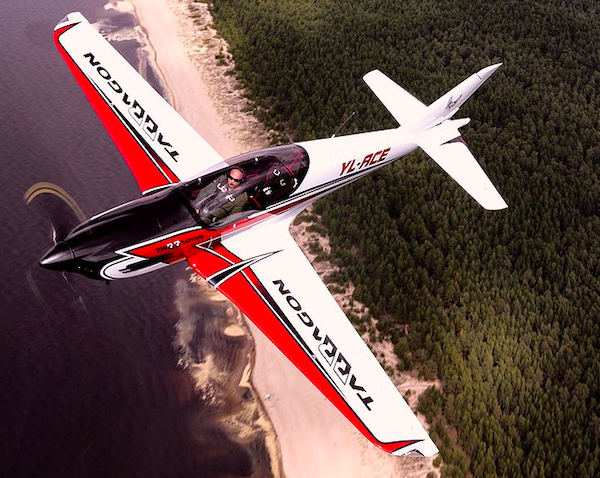 Loading comments for Meet Latvian made Tarragon aircraft - no less than 10 to export this year...