With the geared turbofan (GTF), Pratt & Whitney and MTU Aero  Engines are building the most eco-efficient propulsion system currently available in the marketplace. MTU not only contributes key turbine and compressor technologies to this highly advanced family of engines, the company is also responsible for final assembly of one third of the PW1100G-JM geared turbofans that power the Airbus A320neo. “To gear up for these engines, MTU has developed an innovative floor-based line assembly system and built it up and put it into operation at the company’s headquarters in Munich,” explains MTU Chief Operating Officer Lars Wagner. “The system, which is unparalleled worldwide, meets the highest technological standards and also satisfies ergonomic needs.”

The core of MTU’s GTF production assembly line is a highly innovative, remotely controlled floor-based transportation system that – thanks to its modular design – can be flexibly adapted to accommodate the individual build stages of the engine. “The system was integrated into an existing building,” says Ulrich Peters, Senior Vice President, Production. The system provides for PW1100G-JM engine assembly to be performed in several work steps and allows several engines in various stages of completion to be assembled concurrently. Peters: “Once the final expansion stage has been reached, 80 employees will work at the line and assemble one engine per day.” For MTU, this geared turbofan is the first commercial engine ever assembled by the company in its 85-year history. The line has been up and running since late 2016, and around 300 engines have meanwhile left the MTU shop. On average, 20 engines are completed every month.

The in-house development had become necessary since there was no final assembly system on the market that would have suited MTU’s specific needs: Most assembly lines use ceiling-mounted handling facilities – such as the two other GTF assembly lines operated by Pratt & Whitney in the U.S. “For MTU, such a system was not a viable option as it lacks the flexibility we need,” explains Elmar Stichlmair, Project Manager, A320neo GTF Industrialization and the brains behind the system. Another important aspect for MTU was that the system permits engines to be inducted into and removed from the line in a flexible manner.

MTU’s assembly line does without complicated overhead crane structures; instead it relies on a floor-based system. Assembly of the engines is automated, with the latest ergonomic findings being taken into account and advanced assembly technologies and digital tools being used – and there is virtually no paperwork. Says Stichlmair: “Operation sheets, routing cards, assembly steps – everything is linked and mapped in digital form.” Information for operators on individual work steps and the status quo is displayed on screens. 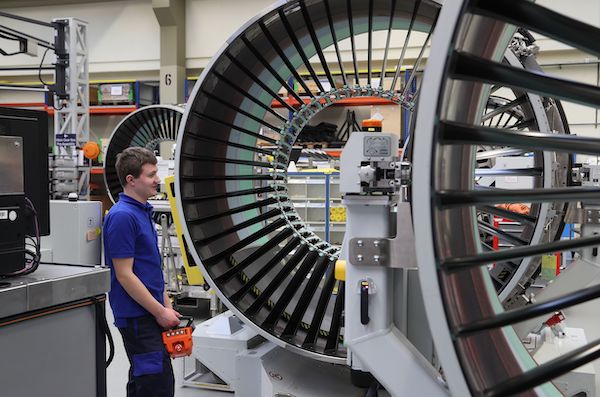 Safe transportation on the ground is ensured by innovative transport carts, which have also been developed by MTU’s experts. The floor-based transportation system, or FBTS for short, consists of 16 individual carriers which can be combined as necessary and move along the assembly line. Stichlmair: “Each of the carriers is remotely controlled and can move in any direction. The vehicles can be controlled and operated individually or in various combinations.” Engines can be inducted and removed at any time.

One of the biggest challenges was to make sure that the engines are securely fixed in place and cannot be damaged, for example, by external forces acting on them while being moved. This problem was solved by an engine support system specifically designed for the purpose that eliminates external forces 100 percent at any time. The compact control unit meets all safety requirements. The control modules for the individual carriers are fully synchronized and interact with one another.

Examples of smart elements as regards digitalization and automation include a completely system-controlled inductive heating system for precise local heating of the components prior to joining, an efficient and system-based completeness check via tablet computer as well as a digitally controlled bar code scanning system for tightening bolted connections that guides operators step by step and prevents incorrect manual settings. The advantage is that bolted connections are thus tightened with utmost precision and in a torque-controlled and automated manner.

MTU’s floor-based final assembly system has great potential: It is being consistently further developed and modified to reflect the latest state-of-the-art. If required, the system can easily be scaled to accommodate other engine types. And it also lends itself for use in engine repair. 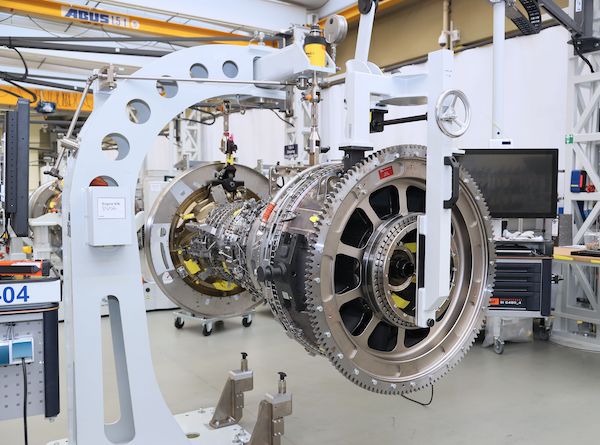