MTU Aero Engines has built a new test center for engine parts on its Munich premises, investing an amount of more than 25 million euros in a new building and the most advanced test equipment. After two years of construction, the test center is now operational. This afternoon, Judith Gerlach, Bavarian State Minister for Digital Affairs, and MTU’s Chief Operating Officer (COO) Lars Wagner inaugurated the facility in a ceremony attended by around 100 guests from business, politics and science as well as company employees.

Judith Gerlach, Bavarian State Minister for Digital Affairs, said: “Like no other state government in Germany, the Bavarian State Government is investing heavily in the aerospace industry. As part of the high-tech agenda recently adopted, we will be providing additional funds in the amount of 90 million euros. ‘Made in Bavaria’ stands for quality and high-tech, and digital transformation is a key driver of innovation. Digitalization has a huge impact not only on product development and production, but also on test methods and quality management.” And she added: “With this highly advanced component test center MTU Aero Engines impressively underscores that it is and will stay committed to the Free State of Bavaria. This is good news for this state as a high-tech region and home to aerospace companies that enjoy an excellent reputation worldwide.” 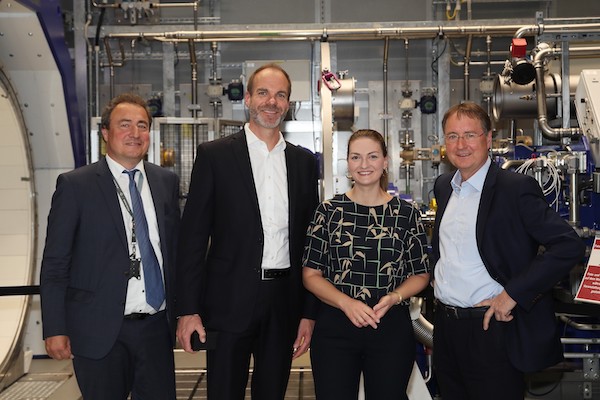 MTU’s COO Lars Wagner emphasized the importance of the new test center: “MTU is renowned worldwide for its unique testing expertise. Our new component test center is yet another impressive proof that we have rightly earned our reputation for excellence in this field.” MTU’s testing capabilities comprise parts, components and complete engines. The company performs development tests, certification tests and production acceptance tests. “In our new test center, we will be testing parts that make up compressors and turbines, that is, for example, blades and vanes, disks, casings, rings, and tubing.” Since safety is the number one priority in the aviation industry, the company’s products must undergo rigorous testing and meet the highest safety standards – right down to detail part level.

Testing of new materials and designs

With the new test center MTU not only satisfies its current testing needs - the company has also set its sights on the future. Dr. Jörg Henne, Senior Vice President Engineering and Technology, explained in his speech: “We’ve built up the testing capacities we need for our current engine programs – but not without bearing upcoming future requirements in mind.” Plans are to test new materials, new designs and larger structures. Henne also talked about entirely new propulsion systems just emerging on the horizon: commercial engines of the next and next-but-one generation which will have to meet even more stringent requirements. “Our ultimate goal is emission-free air traffic, and MTU is already pushing the development of innovative green propulsion technologies systematically forward,” Henne said. 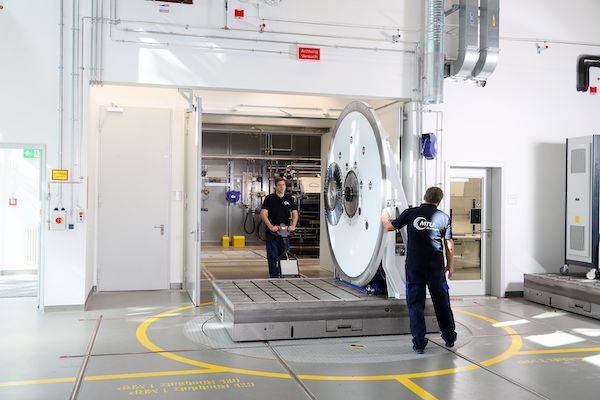 An emerging program in the military segment is the Next European Fighter Engine, or NEFE for short. This propulsion system will be developed jointly by MTU and European partners, and its parts will be put through their paces in the new test center in Munich, according to Henne. The facility has been designed such that it can easily be expanded when needed, for example to add floor space or to accommodate new technologies.

MTU has the requisite equipment for as many as 65 different test types – among them spin tests, air flow measurements, structural tests, vibration, wear, ballistic and fatigue tests. MTU created some excellent new testing capabilities that constitute a unique selling point for MTU and make the company clearly stand out among its competitors. Testing will be performed on the company’s existing three vertical test stands, which have been relocated to the new building, and on other test facilities. The company is confident that the integration of all component test facilities into one test center will bring about a marked increase in efficiency. The centerpiece of the new test facility is a multifunctional rotation test stand. It was built up in a separate enclosure – a twin-wall reinforced concrete structure – and rests on a special soundproof base plate weighing as much as 90 tons.

Smooth operation of all facilities is ensured by highly advanced and sophisticated systems supplying water, electricity, argon, cooling air and hot air and dissipating the heat generated by the test stands. The equipment of the high-tech test center is rounded off with innovative rigging systems, the finest of computing technology as well as office and meeting rooms on the upper floors. 14 employees will work here in an environment that meets the highest standards in terms of ergonomics and environmental protection. The high-tech building was erected on a surface area of 40 meters by 40 meters and is 20 meters high. A total of 1,000 tons of steel went into the building’s construction. 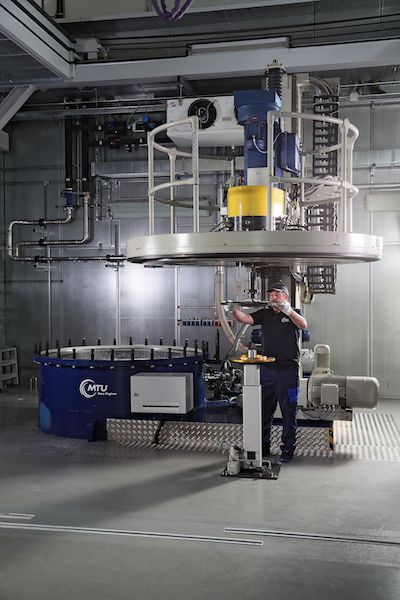 Further investments for the sustained development of the site

Lars Wagner said: “MTU has for years been investing heavily in the expansion of its sites – worldwide and especially here in Munich.” Over the last few years, MTU has invested more than 100 million euros in its Munich plant and built a new blisk production shop, a new logistics center and a final assembly line for geared turbofan engines. The opening of the new test center for engine parts now marks another important milestone for the company’s future growth. And there still is more in the pipeline, according to Wagner: “We have many ideas and plans as to how we can further develop the Munich location, our company headquarters, and also all other sites in the world. By the year 2040, our investments all over the world will have increased to around one billion euros.”