First conversion of a Legacy 450 to a Praetor 500 jet delivered for AirSprint Private Aviation. The Canadian Fractional Ownership company has another Legacy 450 scheduled to convert to a Praetor 500 this year, in addition to the delivery of a brand-new Praetor 500, also in 2021. With these additions, AirSprint will have three Praetor 500s in their fleet, and a total of nine Embraer aircraft.

In total, Embraer has already converted 16 Legacy 450s into Praetor 500s in Europe and North America. The full conversion process can be performed at Embraer Owned Service Centers.

“We are delighted to strengthen Embraer’s partnership with AirSprint, delivering its first converted Praetor 500,” said Frank Stevens, Vice President, Global MRO Centers, Embraer Services & Support. “We are looking forward to receiving another Legacy 450 in the coming months to perform the same modifications, which will offer even more flexibility to AirSprint’s operations.”

The Praetor 500 boasts an impressive, best-in-class range, capable of nonstop flights of 3,340 nm at long-range cruise speed. It can perform one-stop flight missions from Montréal to London, or Vancouver to Miami. In order to bridge the gap between the Legacy 450’s 2,904 nm range and the Praetor 500’s, several key modifications were made. The level-sensing wiring in the fuel tanks was replaced, the over-wing gravity fueling ports were moved, the fuel-measurement system was relocated, and the wing ribs were reinforced to hold additional weight. These adjustments entailed updates to the flight control systems, including a new avionics load for the acclaimed Collins Aerospace Pro Line Fusion flight deck.

Most noticeably, the iconic swept winglets of the Praetor were installed, and the placards and logos were replaced to officially convert the Legacy 450 into a Praetor 500. With the Praetor 500 comes an unparalleled blend of technology, comfort, and performance. In terms of technology, the Praetor 500 features the industry-first E2VS ― a head-up display that combines synthetic and enhanced vision. Plus, it’s the only midsize business jet with full fly-by-wire flight controls and turbulence reduction capability.

Comfort abounds in the Praetor 500 cabin. It’s the only midsize business jet to feature a true six-foot-tall, flat-floor cabin, stone flooring, a wet galley, and a vacuum lavatory―all with best-in-class baggage space. As for performance, the conversion to a Praetor 500 entails an intercontinental range of 3,340 nautical miles (6,186 km) with four passengers and NBAA IFR Reserves. 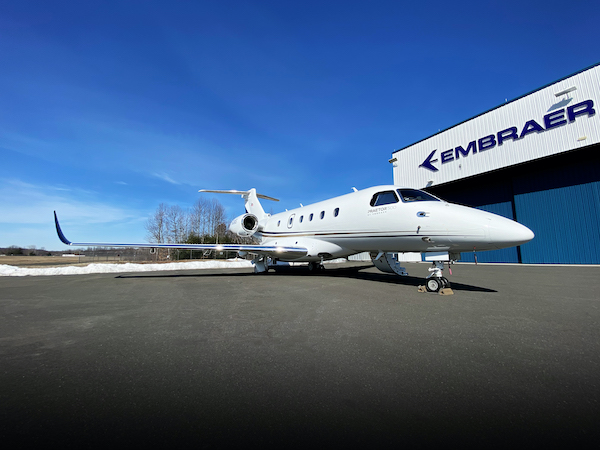