On July 7 and 8, Safran is inaugurating three new production sites in India and announces the construction of a major new facility in 2025, bolstering its strategic partnership with the country. Safran has operated in India for 65 years and now counts 10 facilities and 750 employees in the country. These announcements, which represent more than $200 million of investment between 2018 and 2025, clearly reflect the Group’s commitment to long-term development in the country.

Olivier Andriès, Chief Executive Officer of Safran commented: “With these new sites, we’re opening a new chapter in Safran’s long history with the Indian aerospace  and defense industries, and we are reaffirming our commitment to the government’s ‘Make in India’ policy and sovereignty strategy. To support the country’s dynamic aviation market, with passenger traffic set to more than double in the next twenty years, we are accelerating our investments and industrial development in India. Through the creation of our largest maintenance and repair center for commercial engines we are also paving the way to expand our MRO activities in India to military engines.  With our three new production facilities and our major in-house IT center we will triple the number of employees in India over the next four years, building on the excellent local talent base. ”

Two new neighboring plants are being inaugurated on July 7 in Hyderabad, for Safran Aircraft Engines and Safran Electrical & Power.

The Safran Aircraft Engines plant, spanning 15,000 square meters (162,000 sq ft), will make rotating parts for the LEAP engine from CFM International. It will provide the additional capacity needed to meet the requirements of a production ramp-up for the best-selling commercial airplane engine of its generation. Eventually employing 275 people, this plant applies Safran’s highest standards in terms of industrial processes, machinery and equipment and sustainability, with one-third of electrical power to be provided by solar panels. 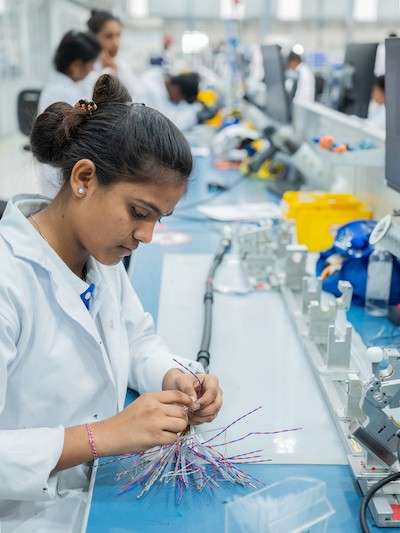 During the inauguration, Jean-Paul Alary, Chief Executive Officer of Safran Aircraft Engines, announced the creation of a new maintenance, repair and overhaul (MRO) facility for CFM LEAP engines, to be built at the industrial Park of GMR. The largest MRO center in the network, it will start operations in 2025 and will eventually offer annual capacity of 250 to 300 engine shop visits. The LEAP and its predecessor, the CFM56, now power over 330 Airbus A320/A320neo and Boeing 737/737 MAX airplanes deployed by airlines in the Indian sub-continent.  More than 1,500 LEAP engines are currently on order in the region.

“Our new MRO 4.0 center in Hyderabad will strengthen our global network and enable us to meet the needs of our CFM customers against a backdrop of booming air traffic in India and the region,” noted Jean-Paul Alary. “We benefit from the fast growing aviation ecosystem and oustanding competences in the State of Telengana.”

Safran Electrical & Power’s plant, located in the same airport zone as the Safran Aircraft Engines plant and sharing all support functions, makes wiring for LEAP engines and the Rafale fighter. Opened in November 2018, the plant has 150 employees today, growing to 200 when it reaches full capacity.

The third plant is being inaugurated on July 8, 2022 in Bangalore, for Safran HAL Aircraft Engines, a 50/50 joint venture between Safran Aircraft Engines and Hindustan Aeronautics Limited. This new site replaces the initial plant that dates from 2005, more than doubling the surface area and featuring state-of-the-art installations. It’s located in a Special Economic Zone near the Bangalore airport. Spanning 11,000 square meters (118,800 sq ft), the plant makes complex piping, mostly for the LEAP engine, and has about 150 employees.

During his visit to India, Olivier Andriès announced the creation of Digit, an in-house entity tasked with development of digital systems for Safran. The entity’s two main facilities, in Hyderabad and Mumbai, start operations in the summer of 2022. Digit plans to recruit 1,000 people over the next five years by calling on India’s vast talent pool for the development of digital applications and systems, as well as cybersecurity. 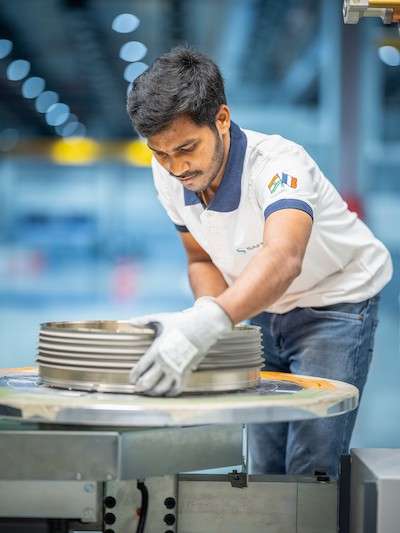