This month Strata Manufacturing marks its 10th anniversary! The company is forecasting further diversification within its client and product portfolio, founded on a decade of successfully manufacturing parts for leaders in the global aerospace industry, and is today recognised as a key enabler to Abu Dhabi’s economic diversification ambition.

In the last 10 years, Strata, headquartered in the Nibras Al Ain Aerospace Park, in the United Arab Emirates (UAE), has become a Tier 1 supplier to the world’s leading original equipment manufacturers (OEMs), taking the ‘Made with PRIDE in the UAE’ brand onto the global aerospace stage, delivering more than 3,000 shipsets consisting of more than 50,000 components to the world’s leading aircraft manufacturers.

“In the last decade, Strata has grown to become a trusted player in the manufacturing industry through its partnerships with global aircraft manufacturers. We have made it our commitment and priority since day one to manufacture and deliver high quality aircraft parts to our customers, as that is a reflection of what the United Arab Emirates offers the world,” said Chief Executive Officer Ismail Ali Abdulla. 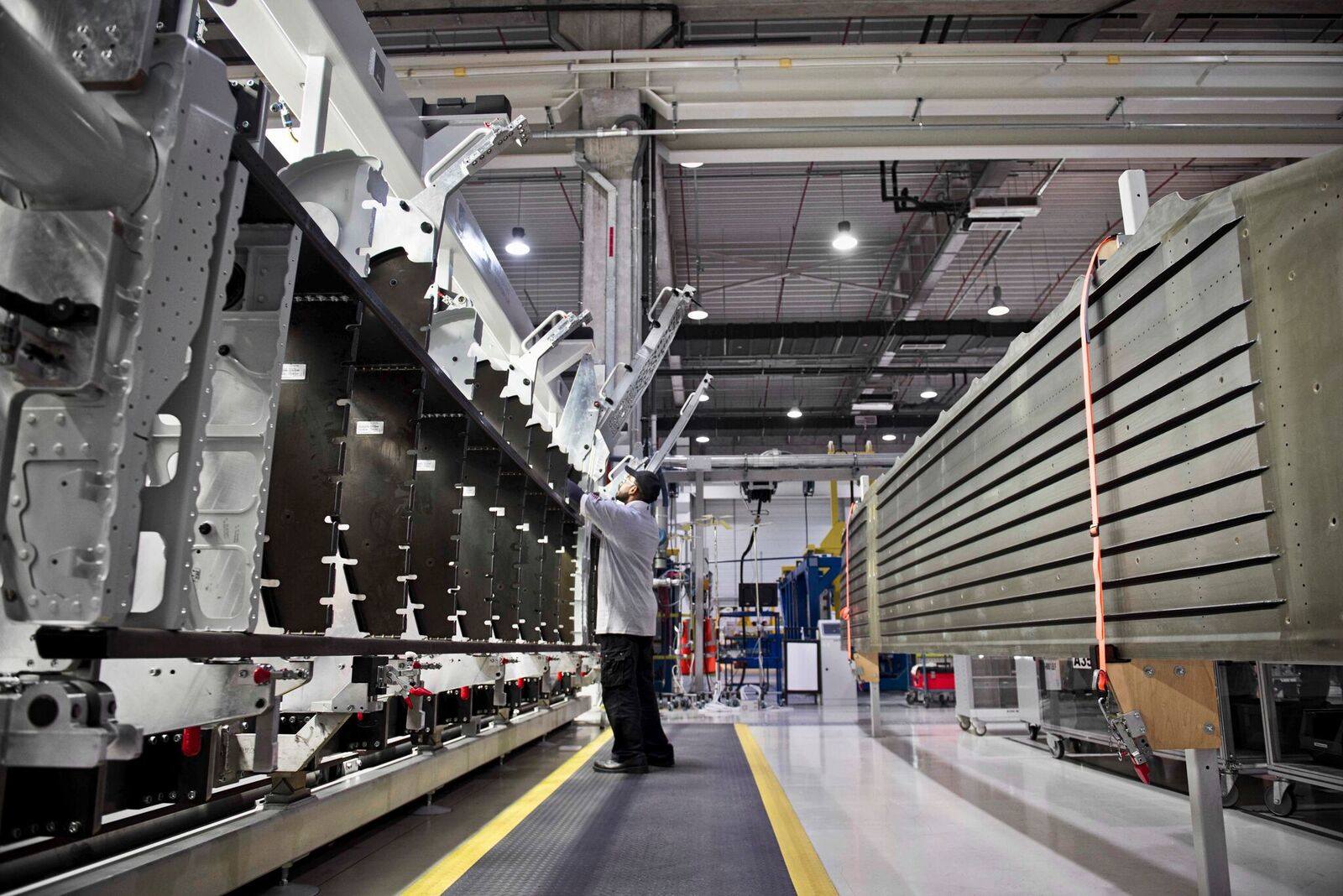 Aligned to the Abu Dhabi Economic Vision 2030 and UAE Centennial 2071 Plan, which seeks to establish a technologically advanced industry and provide high value, long-term employment, training and development opportunities to the local community, Strata has played an integral role in developing the national aerospace industry, in parallel to growing the skills and capabilities of Emiratis, to meet the growing demand for talent in the sector. Currently operating 13 production lines, Strata employs around 700 people from 30 countries - 58 per cent of whom are Emirati nationals and nearly 90 per cent are women.

“Our training programs and partnerships have positioned us as amongst the biggest investors in aerospace talent in the country. We are particularly proud of the number of Emirati students choosing to have careers with us. This is a testament to how successful we have become in attracting the next generation of engineers, who will ultimately play a pivotal role in shaping the future of the UAE’s aerospace industry,” said Abdulla.

The company has launched major training opportunities for its workforce, having partnered with UAE University for a dedicated Aerostructures Technicians Program which spans 24 months, with time spent learning about the fundamentals of aerospace and manufacturing as well as on-site training to qualify the students to manufacture aircraft parts. In collaboration with other educational institutions, Strata offers internships and aerospace workshop sessions to cultivate an informed generation of future talent, thereby elevating interest in careers in aerospace.

To develop Strata’s engineering talent and capabilities, Strata employees undergo a training program that is focused on manufacturing engineering and design, and stress engineering in Boeing facilities in the United States. The program started in September 2017 with two Strata engineers, beginning an eight-month training program at a Boeing facility in Salt Lake City, Utah. The program will continue to train up to 24 engineers.

“It is only through the quick adoption of cutting-edge technologies and nurturing Strata’s engineering capabilities that we will be able to advance within the highly-competitive global aerospace sector and attain our ambitions of moving from a build-to-print, to a design-to-print operation. For evidence of this, it is important to highlight the efforts of the team of 13 Emirati engineers in successfully manufacturing an optimized Flap Track Fairing following the Strata Design Process to extend its EN9100 certification to include design and development in the aerospace industry. As we continue growing as a company, it is key that we invest in the exploration and development of innovative technology that will support the next generation of aerospace structures and keep Strata ahead of the technology curve,” explained Abdulla.

Strata’s ‘Made with Pride in the UAE’ wings and empennage parts now feature on more than eight per cent of the worldwide single-aisle fleets. The company continues to partner with leading aircraft manufacturers including Airbus, Boeing and Leonardo Aero-structures Division. Its customer base amounts to seven major customers including Pilatus, FACC AG, SAAB and S.A.B.C.A.

The soon to be launched Strata Plus, will be an extension of its current manufacturing facilities to cater to the Boeing 787 Dreamliner vertical fins work package. Under the agreement, Strata will replicate the capabilities of the Boeing Salt Lake City 787 vertical fin assembly line to sub-assemble vertical fins for the Dreamliner family of airplanes from its Al Ain facility. Assembly of the work package is scheduled to commence in 2020. The assembled part will be shipped to North Charleston, South Carolina, and installed on 787 fuselages.

As part of its portfolio expansion and diversification in the global aerospace supply chain, Strata has formalized a joint venture (JV) with Belgium’s materials and chemicals company Solvay, marking Strata’s entry into advanced materials manufacturing. The Strata-Solvay JV will establish an 8,500 square meter facility in Al Ain to supply Boeing with carbon fibre prepreg for primary structure applications in its 777X program. The JV will be the UAE’s first supplier of pre-impregnated carbon fibres and the fourth supplier of pre-impregnated carbon fibers in the world

“The JV is another demonstration of our advanced technological operations, our growing local capabilities and our readiness to venture into new territories and explore competing opportunities to drive our business forward,” said Abdulla. 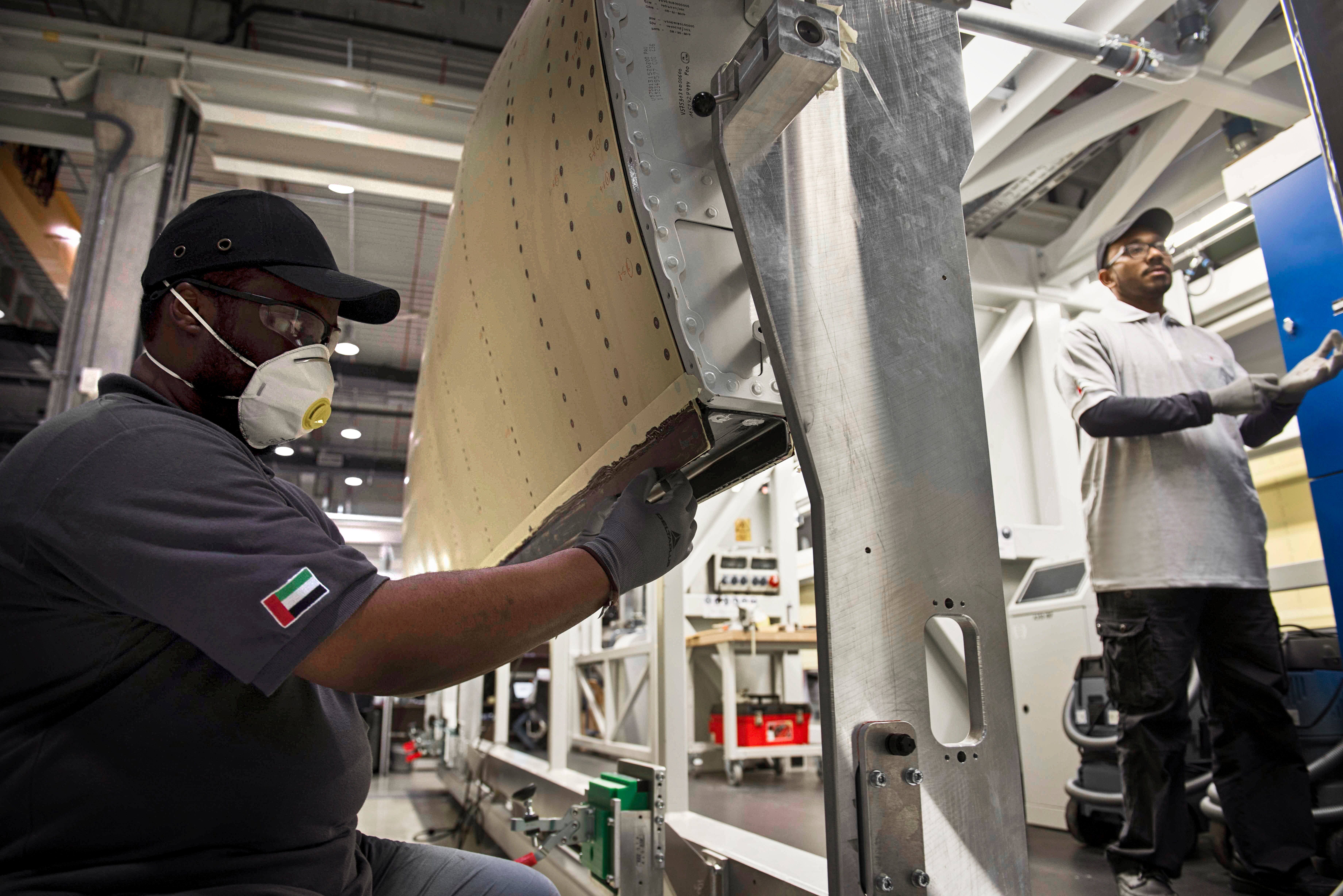 Shaping the future of aerospace

The emergence of the Fourth Industrial Revolution will further propel Strata and its products to new heights. Smart manufacturing, 3D Printing, and Artificial Intelligence are just some of the technologies Strata continues to invest in to increase its presence in the industry. Strata’s Research and Development unit, established in 2015, aims to improve technical competencies to compete in the wider value chain. The R&D unit focuses on a range of projects including additive manufacturing, advanced inspection techniques and optimized processing and machining of composite parts, robotic assembly, artificial intelligence, and data analytics.

“We have already achieved a great deal in our first decade, confounding many original sceptics by taking the ‘Made with Pride in the UAE’ brand onto the world stage,” explained Abdulla. “Yet with the arrival of the 4th industrial revolution, and the prospects it holds out for manufacturing, the next decade will be as transformative for Strata as its arrival has been for the Al Ain community, Abu Dhabi’s manufacturing ambitions and the UAE’s wider global aerospace participation goals.

The roadmap for the next decade will build on Strata’s international success to secure its standing as a highly competitive company within the global aerospace supply chain and in contributing to positioning Abu Dhabi and the UAE as a hub for the aerospace sector.