Embraer Defense & Security and Sierra Nevada Corporation announced the first of 12 A-29 Super Tucano light attack, combat and reconnaissance aircraft for the Nigerian Air Force (NAF) successfully completed its inaugural flight at the production facility in Jacksonville, Florida. The full fleet of A-29 Super Tucano aircraft for the NAF are currently in production by SNC and Embraer at the Jacksonville facility with delivery to the NAF expected on schedule in 2021. The NAF A-29 aircraft will now begin mission modification and final testing in Centennial, Colorado. Following final testing, before delivery, NAF pilots will train in the aircraft.

“This is an exciting milestone in the production of these A-29s for the Nigerian Air Force. The Jacksonville production line is active, and Embraer and SNC look forward to seeing these aircraft continue to roll off the line in the coming months,” says Jackson Schneider, president & CEO, Embraer Defense & Security.

“The aircraft met or exceeded all the requirements and we are very pleased with the successful flight,” stated Ed Topps, vice president of Tactical Aircraft Systems and programs for SNC’s IAS business area. “SNC and our partner, Embraer, are certain the Nigerian Air Force will be pleased with these aircraft.”

The combat-proven A-29 Super Tucano is the gold standard of light attack combat and reconnaissance aircraft around the world and is designed and built for the mission in Nigeria.

The A-29 Super Tucano is the most reliable and cost-effective solution for basic and advanced flight and combat training, close air support operations, Intelligence, Surveillance, and Reconnaissance (ISR), armed over-watch, counterinsurgency and irregular warfare scenarios.

The aircraft has already been selected by 15 air forces around the world to deliver cost-effective close air support and reconnaissance capabilities. 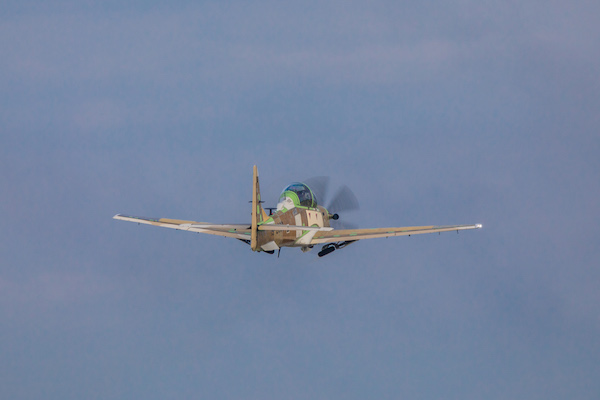