Embraer delivered a total of 181 jets in 2018, of which 90 were commercial aircraft and 91 were executive jets (64 light and 27 large). The deliveries were within the outlook ranges for the year of 85 to 95 for the commercial aviation market, while business aviation market deliveries were below the 105 to 125 outlook, as recently disclosed by Embraer during its recent meeting with investors and analysts at the New York Stock Exchange (NYSE). In the fourth quarter of 2018, Embraer delivered 33 commercial jets and 36 executive jets (24 light and 12 large). As of December 31, the firm order backlog totaled USD 16.3 billion. See details below: 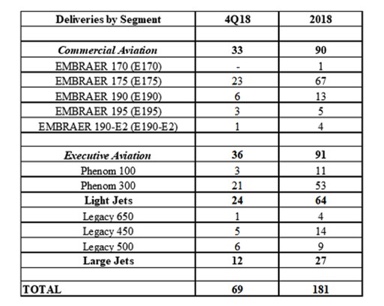 During the fourth quarter, Embraer confirmed commercial jets sales following the agreements established at Farnborough Airshow, in July 2018. Republic Airways, the world’s largest E-Jets operator, signed a firm order for 100 E175 jets. The contract also includes purchase rights for an additional 100 E175s, with conversion rights to the E175-E2, bringing the total potential order up to 200 E-Jets.

﻿Azul Linhas Aéreas Brasileiras confirmed the firm order for a previously announced 21 E195-E2 jets. This contract is in addition to the 30 E195-E2 jets ordered by the airline in 2015, raising Azul's total order to 51 Embraer E2 aircraft. Azul is the launch operator of the E195-E2 and will receive the first aircraft in 2019.

Finalizing the expected deals from the airshow, Embraer signed a firm order contract for three E190 aircraft with Nordic Aviation Capital (NAC), the global leader in regional aircraft leasing, and unveiled that Binter Canarias, of Spain, will receive its first E195-E2 jet in the second half of 2019, becoming the first European customer of the E-Jets E2’s largest model. The airline signed a firm order with Embraer for three E195-E2s. The contract also includes purchase rights for two additional aircraft of the same model.

Embraer also announced in the last quarter that American Airlines Inc. signed a firm order for 15 E175 jets in a 76-seat configuration, as well as the signing of a contract with the Government of Kiribati, in partnership with their national airline, Air Kiribati, for two firm orders for the E190-E2 E-Jets and two purchase rights for the same model. Recently, Embraer unveiled an additional order from SkyWest for nine E175 jets which was included in the last quarter backlog. Since 2013, SkyWest has purchased a total of 158 E175s (including these nine), in order to expand their large existing fleet of Embraer aircraft.

Embraer Defense & Security celebrated an important milestone in the period when its multi-mission airlift KC-390 was granted the Type Certificate from Brazilian aviation authority Agência Nacional de Aviação Civil (ANAC). Also, the Company successfully completed the troop unloading, evacuation by hatch and evacuation tests through the front and rear doors of the aircraft in tests supported by the Brazilian Air Force as well as the Brazilian Army.

In the fourth quarter, the Services & Support area announced a multi-year contract with airlines around the world. Air Peace, Nigeria’s leading private airline, has signed a multi-year Pool Program Agreement for spare parts and support of its six ERJ 145 jets. Trans States Airlines confirmed a contract to implement the Embraer Collaborative Inventory Planning (ECIP) program, a supply chain solution for expendable parts. Besides that, a Flight Hour Pool Program agreement was signed with Western Air, from the Bahamas, to provide repairable component support for the carrier’s fleet of ERJ-145 aircraft.