Pratt & Whitney and Tigerair Taiwan celebrated the delivery of the airline’s first Airbus A320neo aircraft powered by Pratt & Whitney GTF engines. The airline placed the initial engine order in 2019 and has a mixed fleet of 15 purchased and leased aircraft. “We’re excited for Tigerair Taiwan to receive their first GTF-powered Airbus A320neo,” said Rick Deurloo, chief commercial officer at Pratt & Whitney. “Environmental and economic sustainability are key priorities for both companies, and the fuel savings with the GTF engine that will help reduce emissions and lower operating costs to best serve their customers. We look forward to continuing our relationship for years to come.”

To celebrate the arrival of the Tigerair Taiwan’s first as well as the first A320neo aircraft in Taiwan, a grand delivery ceremony is hold at TAMECO. To express that Tigerair Taiwan is dedicated to offering every passenger a better flight experience by introducing A320neo.

A delegations of VIPs from Taoyuan City Government, China Airlines Group, Tigerair Taiwan, Airbus, The French Office in Taipei, British Office Taipei, European Economic and Trade Office, German Institute, Spanish Chamber of Commerce, Airbus, Pratt & Whitney and media were gathering to witness and celebrate the official delivery ceremony of the first A320neo. Since the theme of the ceremony is "Colorfly", the venue is ornamented with lots of color elements, including the key visual, gallery, interactive area, and the clothes of "tigerdancers", a group of people from Tigerair Taiwan’s flight attendants and ground attendants who love to dance.

The aircraft registration number is B-50021. Moreover, the livery on the aircraft is not only painted with Tigerair Taiwan’s logo and the tigerstripe empennage, which are the most representative symbols for Tigerair Taiwan, but also painted with "AIRBUS A320neo ", the official symbol of the Airbus neo family. The custom-made livery is just for memorizing the first A320neo. In addition, the black cockpit window is just like the aircraft wearing a pair of stylish sunglasses.

Compared with other single-aisle aircraft, the A320neo offers the widest cabin in the sky and incorporates the latest technologies, including the new generation engines and Sharklets, delivering a 18 per cent reduction in fuel consumption, as well as 50 per cent less noise compared to previous generation aircraft.

The facilities in the cabin are also upgraded, the passengers can experience lighting change based on different scenarios, music for onboarding, and a USB charging socket and an iPad tablet stand for each seat, to enjoy their flight more delightful. 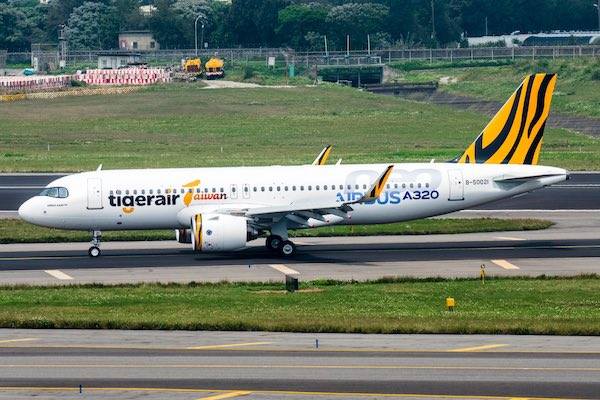