Headquartered in Wiener Neustadt, Austria, the aircraft manufacturer is one of the leading companies in the market of light aircraft made out of glas and carbon fibre. With the development of the world’s first serial aircraft powered by efficient common rail diesel technology, Diamond Aircraft has set new standards in general aviation. Diamond Aircraft convinces on the world aviation market of the aviation industry with its top technology, innovation strength, efficiency, and an industry-leading safety record.

Kevin Reiterer already celebrated his first international titles as a teenager. Since then he has been leading the sport, which only works with an enormous amount of efficiency, commitment and the right partners to truly succeed. The 26-year-old athlete is not only successful on the water, but also as a coach. He already won an Olympic Medal as a National Trainer for Cambodia. But his passion remains at racing. Until the end of the year he will be working on the quest to become a six-time World Champion.

"I look forward to work with Diamond Aircraft. Our philosophy is quite similar and we immediately picked up on the right wavelength. Furthermore, it is amazing to see these planes up close. I hope there will be an opportunity to get on board for some flights in the nearby future.” says Reiterer with a smile.

„Diamond Aircraft is strongly committed to support regional athletes on their way to success. Our partnership is complemented by our commitment to continually evolve and to always deliver the best”, says Amila Spiegel, Global Sales and Marketing Director of Diamond Aircraft.

Kevin is heading to the United States at the end of the month. This year's Grand Prix of America is taking place in Lake Havasu, Arizona from the 7 to 9 of October. 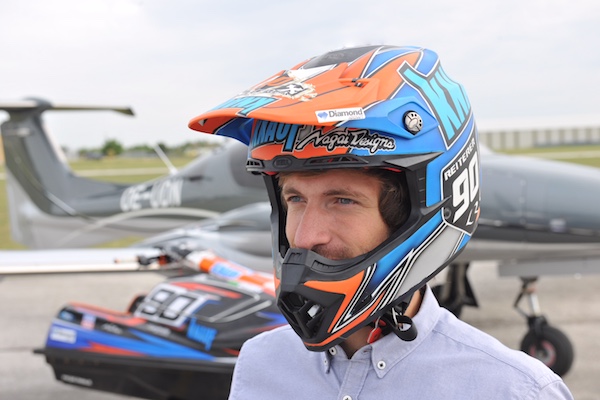