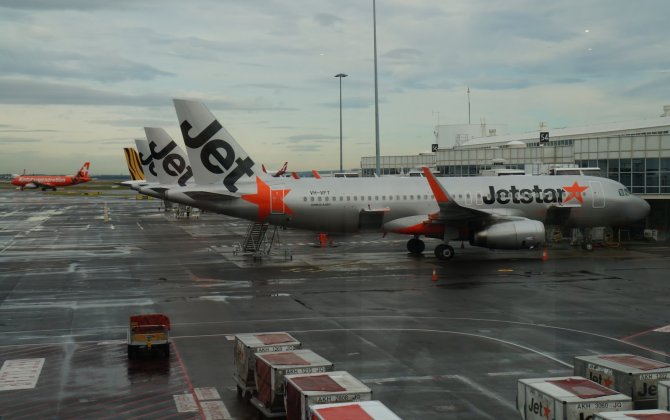 Spark-like flashes of light, bangs and shudders forced a Jetstar plane to turn around shortly after take-off and land back at Auckland Airport.

An engine issue occurred just after take off on a flight from Auckland to Dunedin on Saturday afternoon, forcing the plane to turn around.

Passenger Tony Robinson said there were eight to nine orange flashes of light that looked like sparks, loud bangs, and the plane was shuddering.

"We were still ascending and it felt like the plane almost had a handbrake on. The whole plane was jerking and shuddering," he said.

It did this four or five times before it "had a little break" and did it again another five times.

"Some of the passengers were pushing the button calling crew to come and talk to them but they never turned up."

"It was a significant issue aboard the aircraft," he said.

Robinson said the plane plateaued, then turned around to land back at Auckland Airport. All up they were in the air for about 15 minutes.

"It crossed my mind, I thought what if the engine cuts out and we fall out of the sky. It wasn't a nice thought," he said.

Although the pilot talked to the passengers when the plane touched down, he said no announcements were made on board until the plane turned around forcing everyone to panic.

"There was fear, bewilderment. Everyone was wondering what was going on. They were all keen to get off the plane when it finally touched down."

A spokesman for Jetstar said the flight had to return to Auckland shortly after take off due to an issue with one of the engines.

"The captain elected to return to Auckland and had a normal landing. Engineers are currently examining the aircraft."

The passengers were accommodated on later services he said.

However, Robinson waited for more than 45 minutes after they touched down for some form of announcement, to no avail. He said he had to take matters into his own hands.

He had to get back to Dunedin that night and said he resorted to booking an Air New Zealand flight after he was told at the customer service desk "It would be best if you made your own arrangements," he said.

A day later, he said he still hasn't heard from Jetstar about compensation for the flight or a refund.

"It'd be nice if they said Merry Christmas here you go, here's a free flight for the one that didn't get you there in the first place."

Returning Jetstar flights from Dunedin to Wellington were also cancelled.

ANA HOLDINGS is collaborating with German drone manufacturer and service provider Wingcopter to accelerate the delivery of vital pharmaceuticals and other consumer products via unmanned aircraft. The...