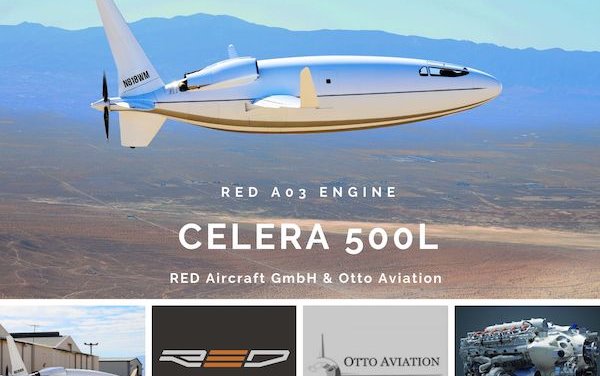 Otto Aviation has recently unveiled its new bullet-shaped plane the Celera 500L, a six-passenger aircraft capable of flying at the speed of a jet with eight times lower fuel consumption. The aviation industry is currently abuzz with this launch, with many experts claiming that the Celera 500L has the potential to revolutionize private aviation. In addition to its’ many brilliant design concepts, the uniqueness of the Celera 500L can also be attributed to its RED A03 engine, a product from RED Aircraft GmbH known to deliver best-in-class efficiency.

Otto Aviation claims that the Celera 500L can cruise at more than 460 miles per hour, achieves a 4,500 nautical mile range, and has an operating cost of just $328 per hour. This aircraft will make it possible to connect all perceivable city pairings in the United States, owing to its fantastic range. According to the maker, the craft’s laminar flow design is the key factor behind its impressive coverage and fuel consumption. The Celera’s extremely low coefficient of drag combined with its lightweight composite structure enables it to operate on much less horsepower than equivalently sized jets or turboprops.

Another key attribute of Otto Aviation’s Celera 500L private aircraft is its liquid-cooled V12 twin six-cylinder German-built RED A03 engine. This rear-mounted engine is certified to operate using both biodiesels as well as Jet A1.

Mentioned below are some of the factors that influenced Otto Aviation to choose RED Aircraft GmbH’s RED A03 engine for the Celera 500L.

"We evaluated several engine options for the Celera 500L. The RED engine outperformed each one with exceptional efficiency through higher altitudes. We’re delighted to partner with RED on this aircraft using their certified engine."

Sebastian Glück, Head of Business Development RED Aircraft GmbH "We are honoured and excited to be part of this new aircraft design.

The Celera 500L demonstrates the great potential of our game-changing RED A03 engine as well as our own engineering capabilities. The power plant combined with the aircraft’s unique design serves to dramatically reduce operating costs and provide performance with cruise speeds equivalent to similar-sized jet aircraft”