OGMA signed a new contract with Pratt & Whitney that reinforces the collaboration between the two companies, which began a year ago. This agreement, signed in the presence of the Prime Minister, António Costa, ensures that Portugal will provide maintenance for the PW1900G engine that currently powers the Embraer E190-E2 and E195-E2 aircraft.  In November of 2020, OGMA was announced as an authorized maintenance facility for Pratt & Whitney, one of the world's largest aircraft engine manufacturers. At that time an agreement was formalized that allowed the Portuguese company to launch industrialization and training to service the Pratt & Whitney GTF™ PW1100G-JM engine. This year, that capability is expanding to include the PW1900G engine.

This was the culmination of a project developed by OGMA, with the support of Embraer, which allowed OGMA to expand its scope of activity in the engine maintenance area, marking the entry of Pratt & Whitney's maintenance, repair and overhaul area in Portugal. 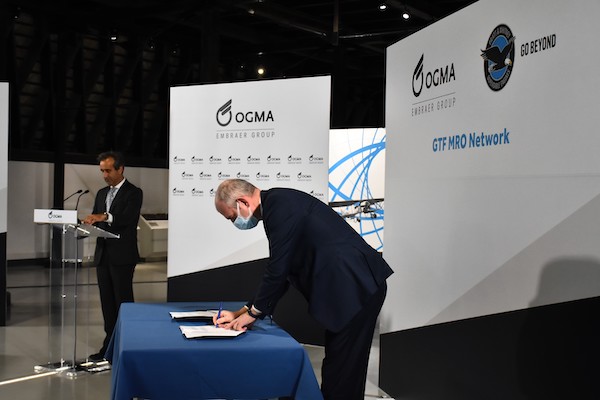 OGMA is investing a total of 80 million euros, mostly in the first four years of the project, in a strategic step that will allow the company to broaden its scope of activity in the engine maintenance area, capture new business over the coming decades and triple the company's turnover, reaching the 600 million euro per year level. Over the 30-year term of the contract between OGMA and P&W, more than 13 billion euros in revenue is expected.

For Alexandre Solis, CEO of OGMA, "this strengthening of the collaboration with Pratt & Whitney is the recognition of a collaboration that began a year ago between two companies that strive for excellence and quality in their products. It is also an appreciation of the commitment and experience of our teams."

“We are pleased to see OGMA’s role as a member of our GTF MRO network expand to encompass the PW1900G,” said Marc Meredith, executive director of GTF Engine Aftermarket at Pratt & Whitney. “The relationship between Pratt & Whitney, Embraer, and OGMA has been invaluable, and we are confident that OGMA’s skill and experience will be a tremendous asset to the network as we continue to support our growing global fleet of GTF engines with world class service.”

“The addition of the PW1900G engine maintenance capability is an important step towards consolidating OGMA as a reference service center for GTF engines for E-Jets E2 operators, in addition to representing a reinforcement of Embraer's business diversification strategy in Portugal, contributing to the satisfaction of our customers and the generation of new revenues in the coming years”, said Johann Bordais, President and CEO of Embraer Services & Support.