With the successful arrival of Flight 9D5671 in Ulanhot, Mongolia, Genghis Khan Airlines' successfully launched its first flight today on a COMAC ARJ21, powered by CF34-10A engine. As the second operator of CF34-10A-powered ARJ21 aircraft and the first airline with a 100% China-made jet fleet, Genghis Khan Airlines has received two ARJ21 aircraft and plans to have a fleet of 25 aircraft in five years.

"It is our honor to support Genghis Khan Airlines' first flight and witness the steady development of ARJ21," said Weiming Xiang, GE Vice President and President of GE Aviation Greater China, at the inaugural ceremony. "GE Aviation boasts successful experience of the ARJ21 project for more than ten years. The CF34 engine, as the sole powerplant for ARJ21, is a mature and reliable product. We are fully confident in supporting the smooth development and operation of Genghis Khan Airlines, and we look forward to further deepening the bilateral cooperation with our customer."

The CF34-10A engine is a part of GE's family of highly successful CF34® commercial jet engines and powers the Commercial Aircraft Corporation of China's (COMAC) ARJ21 aircraft family. CF34-10A is ideally suited to the design requirement of the ARJ21 aircraft and meets the demanding conditions of China's diverse environment, specifically the hot temperature and high-altitude conditions experienced on many routes in Midwest and North China. The engine will also offer customers low-cost operations with a highly reliable, easily maintainable propulsion system.In order to ensure the smooth progress of the first flight and on-going operation, GE Aviation's customer and product support team worked closely with COMAC to conduct validation tests and organized a series of training sessions.

Genghis Khan Airlines Co., Ltd. was entrusted by the Inner Mongolia Autonomous Region People's Government and was approved by the Civil Aviation Administration of China for the construction at the Hohhot Baita International Airport. With the gradual expansion of its route layout, it will make solid contribution to the rapid development of Inner Mongolia's economy and society. 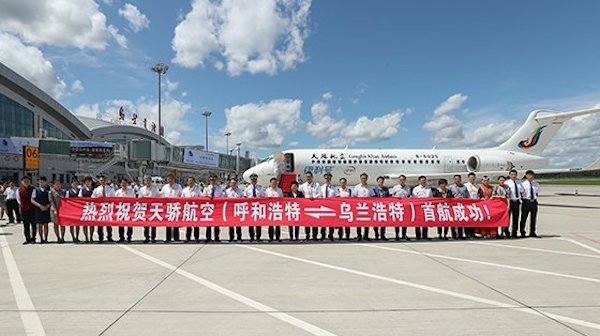