Under the terms of the agreement, CFM will also assist the SAUDIA Group subsidiary Saudia Aerospace Engineering Industries (SAEI) in developing its own engine overhaul services, including disassembly, inspection, assembly, testing, and qualification/certification for the LEAP-1A engines.

In the same time flynas, the low-cost flag carrier, has finalized a multi-year Rate Per Flight Hour (RPFH) agreement with CFM International for the LEAP-1A engines powering the airline’s fleet of 80 Airbus A320neo aircraft. The support agreement is valued at US$4 billion at list price pertaining to the Letter Agreement for aircraft engine selection signed in 2018.RPFH agreement is a part of CFM’s portfolio of flexible aftermarket support offerings.  Throughout the term of the agreement, CFM will guarantee maintenance costs for the airline’s 160 LEAP-1A engines on per engine flight hour basis.

"We have been delighted with the reliability and the best-in-class support provided by CFM over the years," said His Excellency Mr. Ibrahim Al-Omar, Director General of Saudi Arabian Airlines Group. «We look forward to introducing further LEAP engines into our fleet and we believe that this engine will be a real asset in terms of efficiency and cost-effectiveness.”

"We are honored by the trust placed by Saudi Arabian Airlines in selecting our products and support capabilities," said Philippe Couteaux, Executive Vice President of Sales and Marketing for CFM International. "CFM is committed to supporting Saudi Arabian Airlines and flyadeal and to add value into their operations. Flynas has been a long-standing, invaluable customer. It’s an honor to grow our relationship, and we’re confident CFM aftermarket services will help facilitate further growth for our customer, now and in the future.” 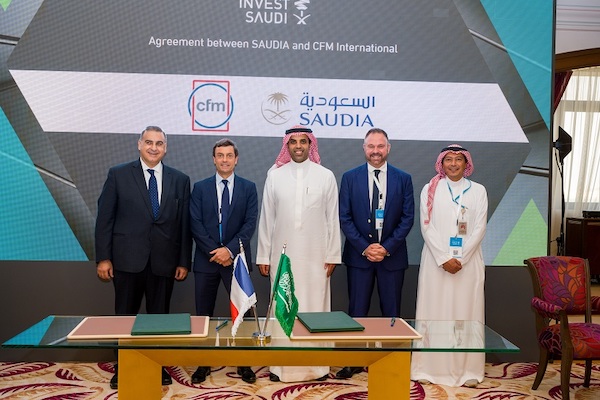