Designed and developed by AURA AERO, a young Toulouse-based company, the new INTEGRAL R aircraft successfully performed its first public flight today, departing from Toulouse-Francazal airport. The aircraft had already performed its maiden technical flight on June 22. The aircraft, registered F-WJMK, took off at 15:30 local time, for a one hour long flight, during which test pilots Eric DELESALLE and Hervé POULIN explored the aircraft’s flight enveloppe according to the plan and saluted its performances : « This aircraft is well born ! As soon as the first flight, the flight commands prove to be remarkably balanced and the efforts are consistent, in both axes. Handling is excellent and this aircraft should satisfy the requirements of experienced aerobatic pilots! »», said Eric DELESALLE.

The aircraft was accompanied by a chase plane for the observation of the various manœuvres, while its progress was monitored by experts on the ground in real-time via a direct telemetry link.

Jérémy CAUSSADE, President and co-founder of AURA AERO, said: « this first flight marks the concrete start of the INTEGRAL adventure and we are very thrilled and proud to see our project finally and actually take to the air! AURA AERO addresses a constantly evolving market, with new needs requiring aircraft that can satisfy these new missions, and this is what we wish to offer with the INTEGRAL family. Our first orders confirm that this aircraft has its place on the twin-seater market today.».

Tolerating high load factors, INTEGRAL R is a twin-seater with a tailwheel landing gear enabling intense aerobatic activity,. It can reach a cruise speed up to 180 kt (335 km/h), more than 1,000 km autonomy and a payload up to 330 kg. Largely made of carbon-wood, INTEGRAL R combines light weight, resistance and easy implementation and repair.

The cockpit of INTEGRAL R is the largest in its category and the aircraft boasts a new generation control panel and ergonomic seats for maximised use of the aircraft, especially during training activities.

This first public flight marks the beginning of the flight test campaign, which will last several months and will lead to EASA CS23 certification of INTEGRAL.

Series production is currently under preparation on two French sites and the final assembly line will be located in the south-west of France. 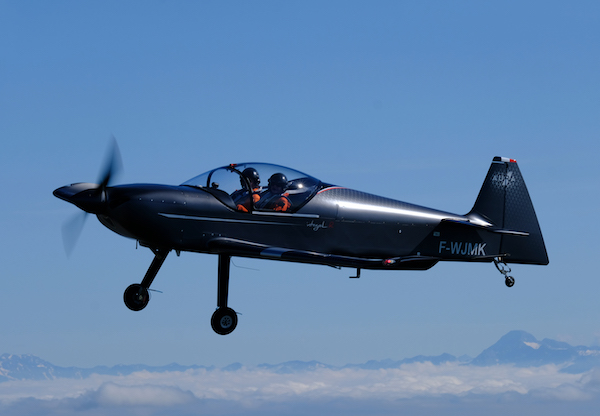 Founded in 2018, AURA AERO is the first digital and eco-efficient aircraft manufacturer, born out of the wish of three aeronautical engineers to combine the best in the aviation industry and the digital area, in order to design, manufacture and operate flying products with unrivalled efficiency, on the growing market of eco-efficient and low- carbon emission vehicles.

Aerobatics enthusiasts with a combined experience of over 40 years in aircraft engineering, manufacturing and in- service monitoring, from single-seater planes to long-range four-engine aircraft, Jérémy Caussade, Wilfried Dufaud and Fabien Raison aimed at developing a new generation, 100% French and eco-responsible twin-seater aircraft. AURA AERO’s fundamental values are reflected in the transmission of the French aeronautical know-how, the operational excellence and the inclusion of modern environmental challenges. Available in two models, the AURA AERO range is available in a kit version and a turnkey one. Based in Toulouse-Francazal, AURA AERO employs some 15 people and plans to deliver its first aircraft at the end of 2020.