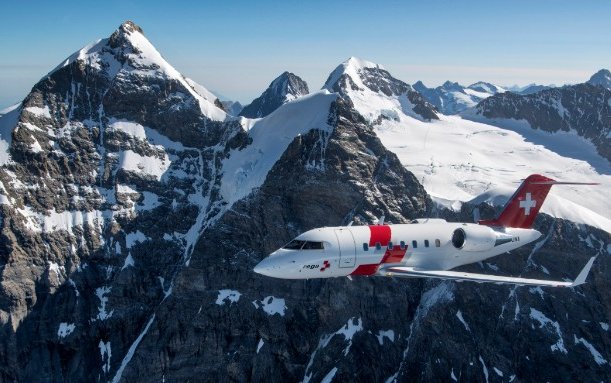 Bombardier has proudly delivered a third Challenger 650aircraft to Swiss Air-Rescue Rega, completing a next-generation fleet of air ambulances tasked with rescuing and repatriating Swiss citizens around the world.

“It is with the utmost confidence and pride that we deliver a third Challenger 650 aircraft to our partners at Rega,” said David Coleal, President, Bombardier Business Aircraft. “Confidence because we know these aircraft have the reliability that is so important when lives are on the line, and pride to see the Challenger platform configured into the world’s most advanced air ambulance.”

Bombardier has a varied portfolio of business jets that can be readily modified for special missions. In this case the three Challenger 650 aircraft, with their widest-in-class cabins, were specially outfitted with two state-of-the-art intensive care units including two patient beds. Bombardier’s signature smooth ride provides a comfortable environment during any special mission.

Swiss Air-Rescue Rega is a non-profit foundation and one of the world's pioneers in aeromedical evacuation. In addition to repatriating patients from abroad with three ambulance jets, Rega carries out air-rescue operations in Switzerland with a fleet of 17 helicopters. Rega acquired its first Challenger aircraft from Bombardier in 1982 and has operated Challenger aircraft ever since.

The Challenger 650 aircraft combines the tried-and-true performance upon which Rega has depended for decades with the enhancements and technology to be the life-saving fleet of a new generation. A member of the world’s best-selling large business aircraft platform, the Challenger 650 aircraft is one of the world’s most reliable business jets, with an impressive range of 4,000 nautical miles and a cabin that is quieter than ever.

The Bombardier Vision flight deck aboard the Challenger 650 aircraft reduces pilot workload, and can be equipped with an advanced Head-up Display featuring Enhanced and Synthetic Vision. This leading-edge technology significantly improves situational awareness and operational capability, particularly in remote airfields with limited visibility.

Bombardier delivered all three Challenger 650 aircraft to Rega from Ontario, Canada. The delivery of the third aircraft took place on Dec. 17.