Here it is the milestone - The 500th Embraer Phenom 300 series aircraft delivered! TOP successful business jet of the decade!

As General Aviation Manufacturers Association (GAMA) reports, the Phenom 300 is the only business jet model to reach this milestone in the last 10 years. The Phenom 300 outperforms in the light jet class with its speed, range, comfort and technology. Being the fastest and farthest-flying light jet, the Phenom 300 has set multiple speed records, certified by the National Aeronautic Association and the Federation Aeronautique Internationale.

“The Phenom 300 has fascinated customers since it entered the market and its tremendous popularity only challenges us even more to continue to deliver the ultimate customer experience,” said Michael Amalfitano, President & CEO, Embraer Executive Jets. “This landmark delivery to a current Phenom 100 customer with prior fractional ownership experience further validates the true innovation that the Phenom 300 delivers to private owners, corporations and operators in the Access Economy.” 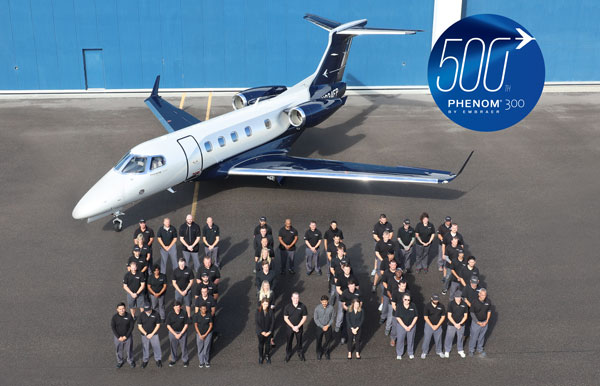 The milestone aircraft delivered today is the Phenom 300E, the newest edition of the most popular light jet. Mr. Freeman Pickett III received his aircraft at Embraer’s Customer Center in Melbourne, Florida and said: “The Phenom 100 served us very well for our trips throughout the Midwest, but as we began to fly more, with more passengers and to destinations farther away, we began to use a Phenom 300 to which we had access. The Phenom 300E has the speed, range and capabilities that we now need, including single-pilot operation—a very important feature for us—with all the cabin space and comfort for everybody onboard, not to mention all the baggage space. The cabin technology is unrivaled and elegant, and the connectivity is quite convenient.”

The Phenom 300E carries the “E” for “Enhanced” and refers to its inheritance of the Embraer DNA Design, first introduced in its larger siblings, the Legacy 450 and Legacy 500 medium cabin jets. The new interior design rendered an even more spacious cabin with more personalization options and greater ease of maintainability as well as unmatched comfort and personalization in the light jet class. 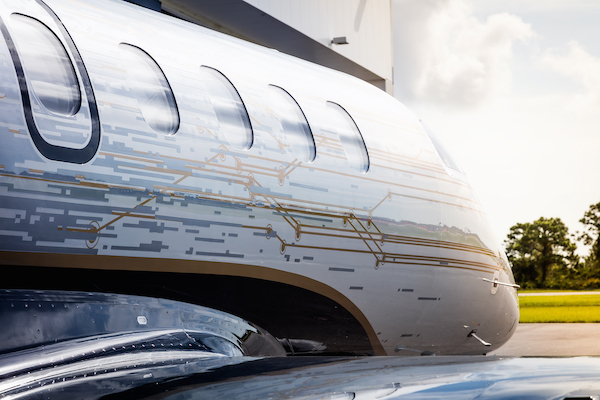 Originally launched in 2005, the Phenom 300 entered service in December 2009 and has sustained more than half of the light jet market share since 2012. The aircraft is in operation in more than 30 countries, having accumulated more than 800,000 flight hours on over 600,000 flights over the past decade, carrying almost 2.5 million passengers over a distance that circles the earth 13 times, equivalent to a round trip to Mars. On average, a Phenom 300 takes flight about every 3.5 minutes, somewhere in the world, which amounts to more than 400 flights per day. In 2018 alone, Phenom 300 customers completed close to 150,000 flights.

Over the last five years, the Phenom 300 fleet has doubled in size, growing at a rate of just over 18% (CAGR) with its utilization growth rate outpacing its fleet growth by 30%. Among fractional ownership programs, the Phenom 300 represents the largest customer base and fleet size. 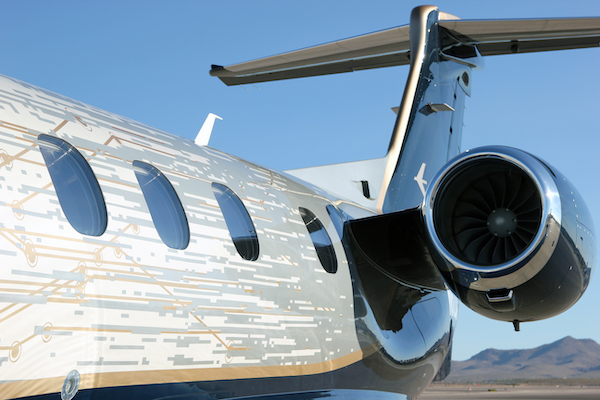 About the Phenom 300E

The Phenom 300E performs among the top light jets, with a high speed cruise of 453 knots and a six-occupant range of 1,971 nautical miles (3,650 km) with NBAA IFR reserves. With the best climb and field performance in its class, the Phenom 300E costs less to operate and maintain than its peers. The aircraft is capable of flying at 45,000 feet (13,716 meters), powered by two Pratt & Whitney Canada PW535E engines with 3,360 pounds of thrust each.

The Phenom 300E offers a spacious cabin with the Embraer DNA Design and its baggage compartment is among the largest in its category. The largest windows in the class deliver abundant natural lighting in the cabin as well as in the private lavatory. The comfort of the seats, with recline and full movement capability, is enhanced by the best pressurization among light jets (6,600 ft. maximum cabin altitude). The Phenom 300E features distinct temperature zones for pilots and passengers, a wardrobe and refreshment center, voice and data communications options, and an entertainment system.

The pilot-friendly cockpit enables single-pilot operation and offers the advanced Prodigy Touch Flight Deck, based on the acclaimed Garmin 3000 avionics suite. The features it carries from a class above include single-point refueling, externally serviced lavatory, and an air stair.